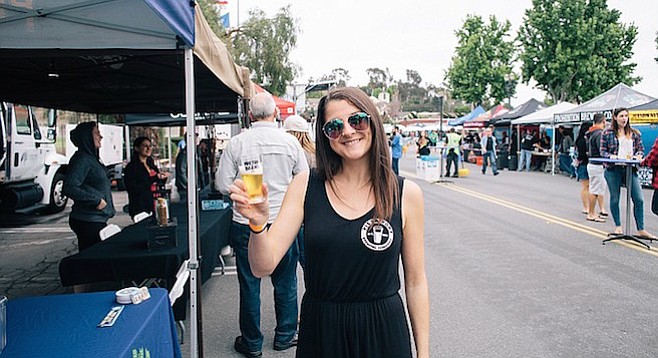 The San Diego Brewers Guild experienced a leadership shuffle at the end of June, as president Mike Sardina accepted a position with the one of the nation's top-rated breweries, Vermont's Hill Farmstead, effectively cutting his one-year term in half.

A 14-year craft-beer veteran, Davidson currently works as sales and brand ambassador for Pizza Port, whose San Diego area brewpubs make up four of the guild's approximately 100 member breweries. Davidson says the original mission of the guild (founded in 1997) was "to promote awareness and increase visibility of locally brewed beer through education and events." Noting the economic impact of beer in San Diego is approaching a billion dollars annually, she adds, "I would say it's been pretty successful."

The SD Brewers Guild is the third largest regional guild in the country — that's including all the state guilds. It publishes a free printed San Diego brewery map and stages beer-centric events including job fairs, fundraising festivals and a golf tournament. Its greatest impact is organizing San Diego Beer Week, running for its ninth year November 3–10.

"A huge goal for beer week is to get lots of people from all over the country and all over the world to come visit and see for themselves what a great community this is," Davidson says. Extending the local beer brand nationally and globally is a priority for the guild, which has been working closely with the San Diego Tourism Authority, San Diego Tourism Marketing District, and the San Diego Hotel-Motel Association to promote beer tourism.

The rolling succession of vice president to president was to create continuity in guild leadership, and Davidson points out the guild has established a planning committee to extend continuity of programs by looking ahead up to ten years. She explains as the business of beer has grown complicated recently, the guild has started developing committees to oversee different interests.

Between the massive influx of new breweries and a recent spate of closings, Davidson says one focus of her tenure will be making sure the guild remains relevant for all the businesses starting out.

"I would like to develop an outreach committee to help out new brewers," Davidson says. "It's still important for us to be that body that new breweries can use as a resource."