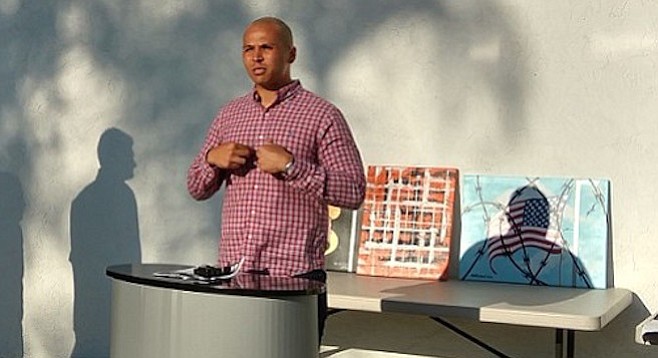 "Would you want your child walking by this place every day?"

About two dozen community members gathered in Mountain View on Tuesday afternoon (July 5) to protest the presence of a transitional corrections facility run by the for-profit private prison conglomerate Corrections Corporation of America.

"We're trying to get the county to take back the facility and to use it for some community purpose like a recreation center," explained neighborhood resident Michelle Massett. "There are sex offenders in here. There's two churches right next door, often filled with children, women, other community members who feel at risk. Two doors down there's a school. Would you want your child walking by this place every day?"

The 463-bed co-ed facility on 35th Street functions both as a work-release center as an alternative to full-time incarceration for low-level offenders, who are allowed to leave during the day to attend their jobs, and as a transitional facility for prisoners preparing for early release. Ex-convicts and former guards said the system, and the CCA facility (operated under the name of a subsidiary) in particular, fail to meet the needs of its population.

"Their main incentive is to make money — to turn people into commodities. People are no longer human beings, they're a product to be made money off of," Mark Bartlet, a former guard, told the crowd. "These are things that I witnessed firsthand because I used to be part of the system. I used to work here, in this building. And I would see how people in the system are set up for failure."

Bartlet, who is embarking on a hunger strike to call attention to alleged wrongdoing, called for a return to county management of the facility and for a full investigation into what he says is rampant drug-test falsification and serious understaffing issues.

Similar allegations have plagued Corrections Corporation of America for some time. The company was recently the subject of national attention with the publication of an undercover investigation of one of their facilities in Louisiana. 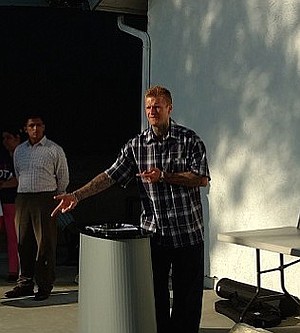 Ryan Rising, who was released from Folsom State Prison in August 2015, said he'd managed to find his way in San Diego after being released with little more than $200 in "gate money" and a bus ticket. He now attends City College and operates an organization that helps other formerly incarcerated individuals complete college applications.

"I honestly believe that education is saving my life right now, and I believe it's a tool to reduce the recidivism rate," said Rising, who was critical of what he characterized as minimal efforts on the part of the prison system to prepare inmates for a return to society.

"If we've got nowhere to live, we're back on the streets. And the only thing we know how to do is survive by any means necessary — it's not cool to set us up like that," Rising continued. "We need a righteous pre-release center that provides schooling, that provides training in the trades. Right now these people are underserved, they're under-fed, they're taking 25 percent of these people's earnings and keeping it. We need a pre-release system that's going to build people up — we need to be in the business of making people, not breaking people."

At least the Mountain View residents don't have far to go to visit their friends and relatives.