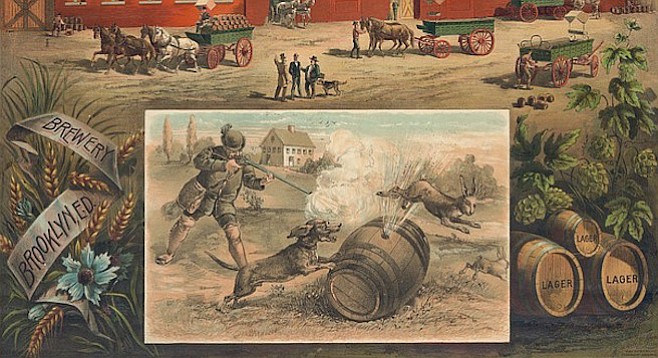 This is the rare craft brewery with deep traditional roots. Back in 1866, Bavarian immigrant Leonhard Eppig cofounded a brewery in Brooklyn. The original Eppig Germania Brewery thrived for more than 50 years before the 18th Amendment to the Constitution passed in 1920. The company ultimately managed to survive Prohibition, prior to being sold and absorbed by larger companies in 1935.

150 years after its founding, descendent Stephanie Eppig has decided to revive the brand here in San Diego, near her North Park home. She says the history of the Eppig brewery has remained a part of her family's oral tradition. "When Prohibition started," she recounts, "they actually changed the name of it to the Interboro Cereal Beverage company."

Cereal beverages are essentially near beer, an under .5% alcohol malted-grain drink. A number of breweries — including Anheuser-Busch — converted to cereal beverage production to stay open during Prohibition, and the Eppig brewery appears to have been one of them. Officially, after Prohibition's repeal in 1933, the brewery was bought by the Ehret family, who previously owned Hell Gate Brewery. Also established in 1866 New York, Hell Gate was at one time said to be the nation's largest brewer by volume.

However family history suggests the Eppig brewery — known for making lagers and wheat beers — continued to secretly brew contraband beer throughout the '20s. "They made it through Prohibition by selling beer through underground networks," according to Stephanie. "There's a rumor that, actually, the mob took the brewery from the Eppig family."

A little internet searching points those rumors to Interboro Cereal's likely being run by Arthur Flegenheimer, aka Dutch Schultz, the mobster who earned the nickname "Beer Baron of the Bronx." Whatever may have happened between the Eppigs and the Beer Baron, the brewery itself was eventually purchased by Schlitz Beer, the 167-year-old Milwaukee Wisconsin brewery now owned by Pabst. 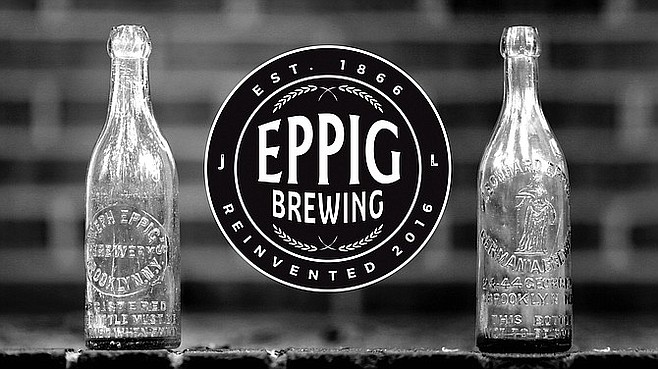 The new Eppig Brewery brand, along with antique bottles from the original family brewery dating to 1866.

The new Eppig Brewing expects to open by the fall. It plans to serve at least one Bavarian beer style at all times, in addition to more inventive recipes, seasonals, and IPAs. Stephanie enters the business from a career in brand management, partnering with her photographer husband Todd Warshaw. She says they have long dreamed about reviving her family business, and a couple factors in particular made this the right place and time.

One has to do with the local talent pool: "This really is the place to be to have the best people working on your beer." Eppig has already identified a working local brewer to head up the operation but hasn't announced a name yet.

She adds that the opportunity presented by a turnkey brewhouse played a big role. "Brewery Igniter was the avenue to help us pull of that dream with less capital and less risk."