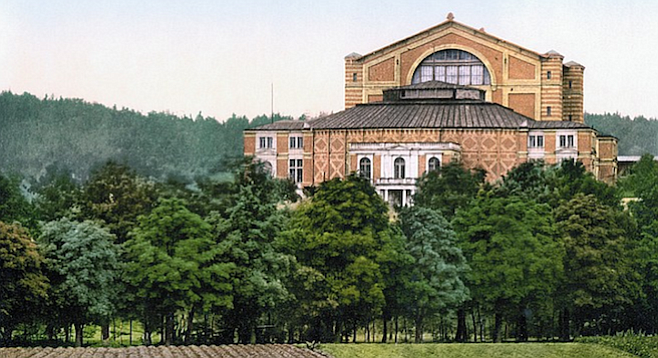 Wagner's homage to Wagner continues its tradition of drama

There is no lack of drama behind the scenes at the world’s most exclusive and prestigious music festival. Conducting super-star Adris Nelsons has canceled his appearance at this year’s Bayreuth Festival in Germany. Nelsons was to conduct Parsifal on the opening night of the festival, July 25.

This is a big deal within the context of the opera world, particularly the fanatic world of Wagnerian opera. Bayreuth has been a place of pilgrimage since its inception in 1876. Nelsons was to conduct Parsifal, which is the ultimate expression of Wagner’s religiosity.

...conclusion of Parsifal from a previous Bayreuth production

To cancel on conducting Parsifal on the opening night of the great festival means something was significantly amiss. The official statement reads:

“With utmost respect to the Bayreuth Festival's management and staff, director and his team, assistant conductors, cast, orchestra and chorus, Andris Nelsons has asked the Festival's management for rescission of his contract for this Summer’s production of Parsifal. Owing to a differing approach in various matters, the atmosphere at this year’s Bayreuth Festival did not develop in a mutually comfortable way for all parties. With regret, the Bayreuth Festival agrees to Andris Nelsons’ request. Andris Nelsons is deeply sorry to be sharing this news with his Friends, Supporters and Colleagues and hopes very much for understanding and sends his warmest wishes to all.”

This is a situation that should be handled with truth. Wagner would have never written such a simpering, half-baked, pack of platitudes. Of course, Wagner’s forthcoming style got him in trouble, but without it he wouldn’t have been Wagner and we wouldn’t have the festival in the first place.

“The truth shall set you free” is a statement that has become a punchline but it is straight on. Until the truth is told, nothing can be addressed.

In spite of the measured and respectful tone of the official statement (lie) it is obvious that this is an ugly situation. The ugliness shall remain or perhaps even grow at Bayreuth because no one is willing to express the truth.

It is simple. Tell the truth and then fix the situation. Too bad the difficulty exceeds the simplicity by powers of 10. I’m going to blame the stage director because why not? No one is telling the truth so we might as well speculate.