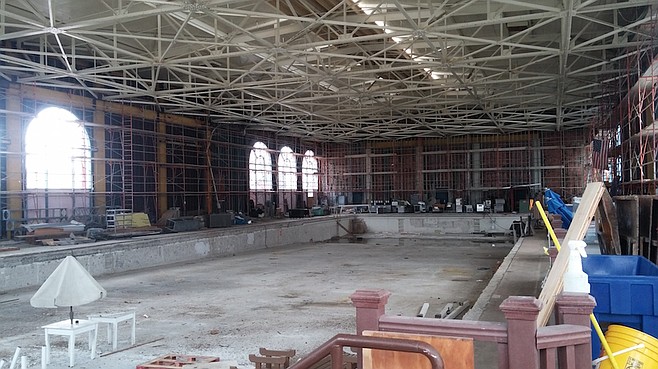 The Plunge is stripped to the bones

The Plunge at Belmont Park, which closed in February 2014 for a serious remodel, is now headed for a complete tear-down and reconstruction, and not very quickly, according to Nick Biancamano of Pacifica Enterprises, which holds the lease on the city-owned property.

"We are committed to this project and to doing it right," Biancamano said. "We are still waiting to get the permits from the city we need to get started."

Pacifica won the unanimous support of the Mission Beach Precise Planning Board for the restoration project in 2013, with a plan that would involve building a largely glass-and-aluminum building with a retractable roof to replace the old structure. The new building will be identical in size to the former 21,000-square-foot building that stands 48 feet high.

The Wyland mural was disassembled and protected as part of the project. As work progressed inside, it became apparent that the 90-year-old pool also needed shoring up. Despite best efforts, tile was broken during the process and replacement tiles have not been found.

Once permits are issued — and Biancamano said that date is uncertain — work will also stall because construction is forbidden during the summer tourism season.

"Everyone is working together on this, and we have the support of the community," Biancamano said. "It is how the process works that it takes time. Belmont Park has been left behind and untended for a long time, so there is much to do."

Asked about the $6 million the developer estimated as the cost to fix the building up, Biancamano said it will be significantly more but declined to provide a number.

"We won't really know until it's finished," he said.

Pacifica engineer Dan Hayden told the Mission Beach group that the old building took a double punch as it was pounded by the ocean environment outside and the chlorinated air of the pool inside. The new one, with high-tech glass, should hold up much better, he said.

The Plunge was designed by British architect Frederick Clemeshaw and built in the 1920s. In 1986, Save Our Heritage Organisation and former mayor Maureen O'Connor fought city plans to redevelop the park, taking the whole thing to the voters, where they prevailed, according to SOHO. Despite that, developers won and razed everything, leaving only the Plunge pool and entryway behind, the organization says.

In 1988, in a last-minute desperation plea, SOHO urged the retention of the historic pedestal and steps around the pool. Kelley-Markham and O'Connor joined the battle against the County of San Diego's health department, which said those features were unsafe. O'Connor argued, "It's the only last remaining essence of historical significance left. There is nothing left of that place except the tiles and the pedestal and the steps."

As a result of their efforts, the city council countermanded the health department's order and unanimously vowed to pursue any means to save the steps and pedestal.

I don't get what they are trying to do here. I can appreciate the history of the plunge; I've seen the photos of the people in the old days, up on the second level watching the swimmers and the divers going off the high board. That was a nice way to spend a leisurely afternoon-- back then. Today, who wants to watch people swim in a pool? Even if they rebuild the pool with glass walls, do they honestly expect people to stand around watching swimmers the way we watch the fish and polar bears at the aquarium? I doubt, due to liability issues, they will have diving boards again, so what's to watch? They ought to just rebuild the pool and open it to the public, the way it was in its last incarnation. It's a nice alternative for those who would rather not brave the surf. As for those who like to watch, way better to go down to the beach and check out the wahinis in their Brazilian thong thingys. Now that's entertainment.

I'll bet if they had nude swimming people would watch.