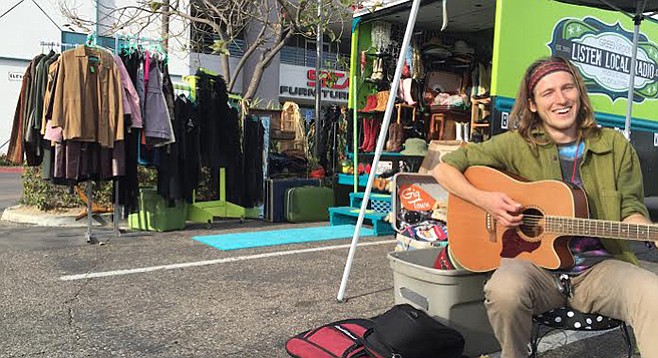 “This area is my mobile studio,” Cathryn Beeks says, sitting in the forward passenger area inside an old bread truck painted lime green and black. On Facebook, the singer/songwriter/show producer now also lists her occupation as “truck driver.” From the driver’s seat, Beeks points out the sound-proofing panels, on-air beacon, microphone, and digital recording gear: the mobile version of her Green Room. The rear of the van opens into a clothing display room.

“This was her first time driving it,” Beeks’s husband Jon Edwards says while he Armor-alls the tires and helps set up the portable stage outside the Gig Town offices on Miramar Road. Today is the rolling Green Room’s inaugural run. “She’s doing okay.”

...by the Cathryn Beeks Ordeal

Beeks and Edwards live in Crest, in a split-level farm house overlooking El Cajon; her original Green Room, a mixed-use recording studio and garment-sales room is tucked inside. “The gig up in the hills was too far away,” she says. She’d meanwhile been looking at the trendy new fashion trucks in New York. Push came to shove when Beeks’s long-running House of Blues gig dried up. “The rug that was my successful six-year weekly residency was yanked out from under me when an interim GM implemented some changes that were not in my or the local music community’s interests.”

The 47-year-old entrepreneur first arrived in San Diego in 2000; by 2002, Beeks started a singer/songwriter showcase circuit along with an online presence: ListenLocalRadio.com. That’s where the former host of KPRI’s Homegrown Hour presents her weekly Listen Local Show.

In April, Beeks plans to revive a long-gone San Diego tradition by releasing her own version of the Homegrown Album. “I was sad to hear that KPRI folded, but it seemed like a great time to reclaim the Homegrown legacy. I asked Jeff Berkley (producer/cohost of Homegrown Hour) and Jim McInnes (the ex-KGB personality who anchored the original Homegrown Hour) if they’d join me in not only reviving the show but in putting out another album.”

Beeks is accepting submissions for the next Homegrown album via ListenLocalRadio.com. “The only requirement is that the song must be about San Diego and it must be submitted by March 15, 2016.”

Meanwhile, Beeks has plans to roll the mobile Green Room twice a week, “a weekday and a weekend. Our events will feature live unplugged or amplified concerts, live art, vintage shopping, music and art lessons, and more.” But a visitor can’t help but notice that the rolling Green Room is a labor-intensive venture.