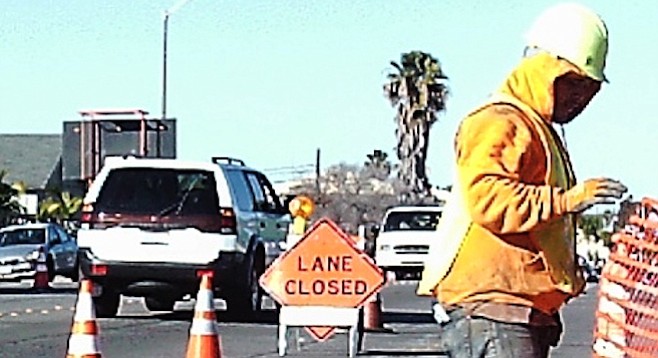 Construction began in December on an extension of the Bayshore Bikeway that will cut across Imperial Beach on 13th Street and reach the Naval Outlying Landing Field (NOLF) helicopter training base on the other side of the city.

"The primary objective is to create a more bicycle-friendly connection from the Bayshore Bikeway to the southeastern portion of the community," said Imperial Beach city manager Andy Hall via email. The construction is expected to be complete by March.

The majority of the project is funded through California’s Active Transportation Program, made up of state and federal funds, and administered through SANDAG, according Hall. "The funding source is provided to encourage alternative means of transportation and reduce vehicle trips where possible," he said.

So it shouldn't cost the Imperial Beach too much.

"There were some matching funds provided by the city, I believe in the $100,000 range, but in any case a small portion of the project," Hall said. "With the exception of the small percentage of matching funds, it is anticipated that the grant sources will cover a majority, if not all, of the costs with any overruns being the responsibility of the city."

The plan caused some controversy on social media, with local residents complaining that 13th Street will no longer have two lanes in each direction. "Stop reducing our roads to two lanes," said Jennifer Welsh on Facebook. "It is ridiculous."

Hall confirms the change to two lanes but said it shouldn't be a negative because "13th Street will have a single lane in each direction with a center turning lane. In most areas of the roadway right now, there is not a center turning lane, and any left-hand turn has the effect of stopping the inside lane," he explained. "The turning lane will allow the through lane to keep moving." Near the landing field, 13th Street will still have two lanes heading south to allow free flow of traffic from the helicopter field.

Traffic isn't really an issue, Hall said, because "13th Street is not a high volume road in most instances.”

The project isn't only about bikes and cars.

"This project will introduce upgraded pedestrian crossings which is critical with so many schools in the area," Hall said, adding that the three-lane construction is much safer for pedestrians than four lanes.