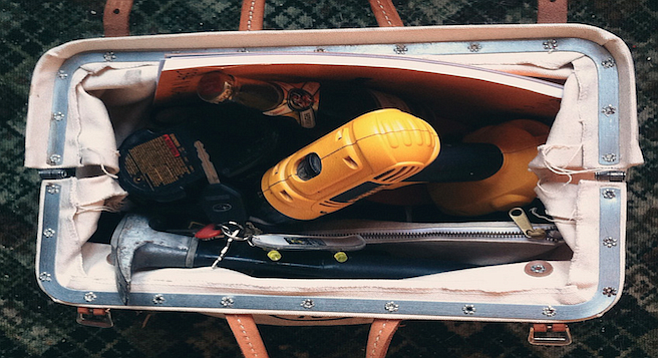 ...and press the right buttons on conceptual debut Time and Materials

For two artists who met back in the early '00s at Southern Illinois University and have undeniable chemistry as indie rappers with a penchant for exploring human sadness with wit and humor, it's surprising that Open Mike Eagle and Serengeti have only made a handful of songs together prior to uniting as Cavanaugh. Past tag-team efforts such as "Universe Man" and "Four Days" showed how seamlessly their styles mesh, and Time and Materials delivers on that promise.

...off of Cavanaugh's debut Time and Materials

Mike Eagle's verse-opening couplet on "Screen Play" is emblematic of the alienation and uncertainty that pervades the collection. Conceptually, Mike and Dave (Serengeti) play maintenance men in a mixed income luxury-condo/subsidized-housing structure with separate entrances for the rich and poor in the fictional setting of Detroit, Florida. They drink on the job and spend their days talking shit to one another to blow off steam, while contending with the frustrations and grievances of the two populations they are caught in between.

The lines separating the perspectives of Mike and Dave, the real-life rappers, and Mike and Dave, the maintenance men, are often blurred. "Practice my whimsy, become the next Herb Dean/ Sometimes in rapping man you start to lose steam/ Plane trips and towns don't seem as interesting/ After night's over start to ask yourself some questions," Serengeti raps on "Pinky." Aside from his verses on the aforementioned track, Geti's writing on Time and Materials is more free association and character sketch than pure narrative. You fill in the blanks where you can, and make your own conjectures based on the backstory. Mike is more abstract than usual on the record and occasionally veers into the stream-of-consciousness territory often occupied by Geti. His writing approach permits expressing profound existential dread one moment and making a poop joke the next, which I think should be applauded.

Time and Materials marks Open Mike Eagle's first outing as a producer, and given the record's expertly manipulated samples and front-to-back quality, it's no wonder that it's something he's been working on for years. He cites anxiety as an inspiration for the beats, and it shows throughout the album. From the surrealist crawl of "Screen Play" to the beautiful melancholy of "Wonder Girl" to the brooding drone of "Typecast," this is a dense and diverse record that plays to the songwriting strengths of Mike and Serengeti and hints at greater things to come as their partnership evolves.