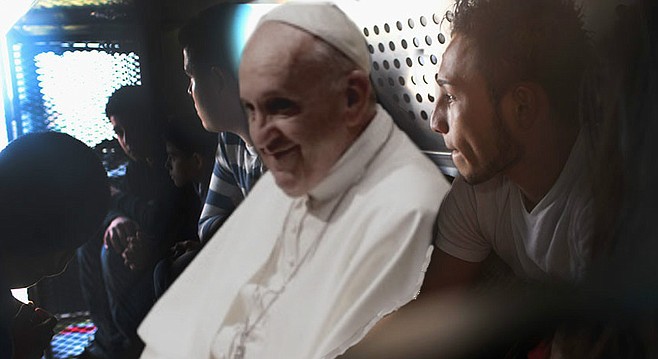 Pilgrimage to the Promised Land? 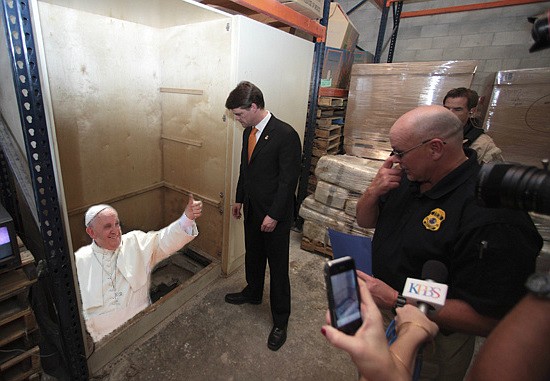 Making an entrance: Pope Francis gives a happy thumbs up to United States diplomatic and immigration officials as he emerges from a cross-border tunnel into a San Ysidro Wal-Mart warehouse facility. “It was very considerate of Mr. Pope to let us know exactly when and where he would be arriving,” said ICE Commander Wally Brownout. “But of course, we still had to take him into custody. He’s a foreign national entering the United States through irregular channels, and the law is the law. When I explained that to him, he said that Pontius Pilate probably told himself the same thing. I have to admit, that stung a little."

Throughout his reign, Pope Francis has sought to emphasize the Catholic church’s outreach to the poor and suffering of the world, and his recent visit to Mexico gave him ample opportunity to do just that.

The pontiff visited a slum outside Mexico City where women were routinely slaughtered, and spoke at length in the ruined city of Juárez about perseverance in the face of a seemingly hopeless infestation of drugs and gang violence. But Vatican insiders say that not even the Pope’s closest advisers knew about his plan for the final day of his visit: a trip through an abandoned drug tunnel into the United States. 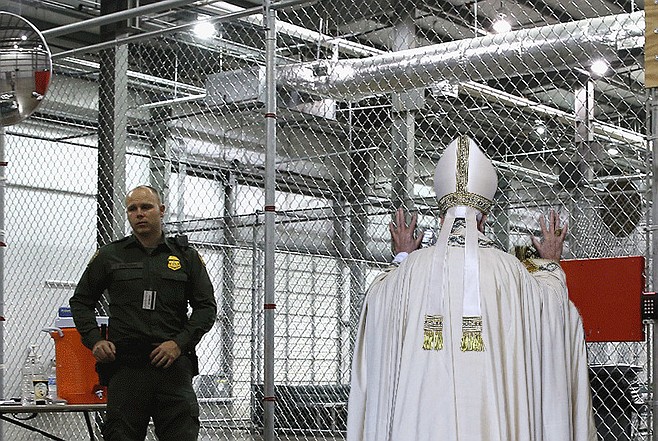 Papal pat-down: the Supreme pontiff assumes the position at the Otay Mesa immigration detention facility while a guard awaits instructions as to what exactly he is supposed to confiscate. Ultimately, Francis was permitted to keep possession of his Papal Ring, which one source described as “surprisingly blingy for someone who is such an advocate for the poor. I guess papacy has its perks.” The fancy hat, however, was removed, on the grounds that the gold tassels might been seen as indicating gang affiliation and spark a riot. The vestments he donated to a chilly youth, in keeping with Matthew 25:36: “I was naked and you clothed me."

“His Holiness has given us the slip before,” said a member of his security detail, who spoke on condition of anonymity. “Several times, he has gone incognito into the streets of Rome to interact with ordinary citizens. But this was bold, even for him. Perhaps he was inspired by seeing once again the sorts of struggles he knew firsthand in Argentina."

"Jesus said, 'If anyone forces you to go one mile with him, go two miles with him,'” said the Pontiff upon emerging onto U.S. soil. "The clear message here is that we must share one another’s journey, even if it takes us to unfamiliar, even frightening places. For instance, a narrow tunnel into another country. So many Latin American Catholics have been driven by their poverty and suffering to cross into the United States, often through extra-legal channels. As the shepherd to my flock, it seemed only right that I travel that same path.” 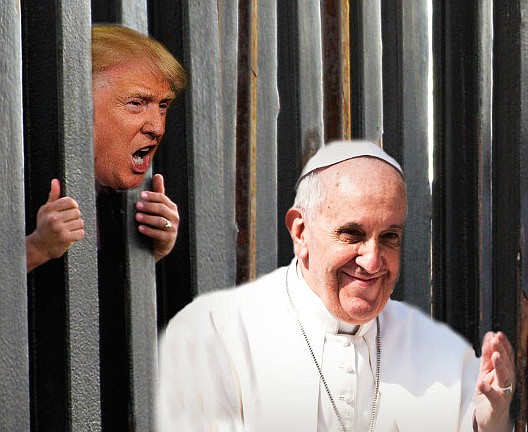 And stay out! Pope Francis, safely on the right side of the Playas de Tijuana-Imperial Beach border fence, greets supporters while Republican Presidential candidate Donald Trump, who arrived just in time for the Pope’s deportation, delivers an impromptu foreign policy speech on U.S.-Vatican relations. “Henry VIII knew a little something about Rome meddling with domestic issues! Trust me, Frankie, you don’t want to get your religious chocolate in my political peanut butter!"

Catholics on both sides of the immigration issue were quick to comment. “At least I’m sure he hasn’t come for my job,” said San Diego Bishop Robert McElroy, who is famously friendly to immigration reform. “I mean, he appointed me.”

But Vice President (and Catholic) Joe Biden, speaking in defense of an administration that has deported immigrants at a faster rate than any in history, quipped, “The Pope put one over on us this time. But the United States has some experience with slipping into foreign countries, and maybe one day we’ll return the favor.”

Asked if he was referring to the strike force that secretly entered Pakistan to eliminate Osama Bin Laden, the Vice President merely smiled.

You are a fantastical and funny guy, Walter, but the part about unprecedented numbers of deportees under the Obama administration is sadly factually true. Doctored photo of Popey and Donald at the Border fence is a keeper.

Thanks, monaghan. I do try to include a little actually factual material when I can, just to give things some grit.

NOTE & WARNING: The links provided below contain direct quotes from Obama and his officials.

"President Obama took office vowing to go after unscrupulous employers who hire illegal immigrants, but worksite audits have plunged over the last year and a half, according to a report released Tuesday by the Center for Immigration Studies, tumbling along with the rest of immigration enforcement."

The Left-Leaning LA Times posted an article that shows that the Obama administration, the Illegal Alien lobby, and the major media outlets have been in collusion to depict the "high" deportation numbers. The exact opposite is true since the beginning of the current President's policy. Interior deportation has and will be lower than 1973 rates. This is leading towards more people overstaying their visas and currently, more Illegal Alien minors crossing the border. Obama has just recently instructed border patrol to not turn back those Illegal Aliens on record as having entered illegally as priors, but to let them pass IF they don't have a major criminal record. After the first Illegal Entry, it is a felony each time thereafter.

Even Obama in 2011, called the deportation numbers deceptive when talking to Hispanic voters. President Obama said statistics that show his administration is on track to deport more illegal immigrants than the Bush administration are misleading.

“The statistics are a little deceptive,” he said Wednesday in an online discussion aimed at Hispanic voters."

"If you are a run-of-the-mill immigrant here illegally, your odds of getting deported are close to zero — it's just highly unlikely to happen," John Sandweg, until recently the acting director of Immigration and Customs Enforcement

"The refocus in law enforcement efforts has effectively protected 9.6 million of the United States’ estimated 11 million undocumented immigrants from deportation, the report found. In all, a full implementation of Obama’s changes would reduce annual deportations to approximately 25,000..."

http://www.washingtontimes.com/news/2015/apr/13/immigration-chief-sanctuary-cities-influx-kids/ "The federal government’s chief deportation agency has seen its success plummet under President Obama, and its chief, Sarah R. Saldana, will tell Congress on Tuesday that they’ve had trouble adapting to the changing face of illegal immigration and a lack of cooperation from both American cities and from foreign countries.

Ms. Saldana, director of U.S. Immigration and Customs Enforcement (ICE), says in testimony prepared for the House Judiciary Committee that the dramatic drop in deportations is a reflection of a trickier set of circumstances and pressures from all sides.

She said she had to pull agents off their regular duties during last summer’s illegal immigrant surge at the border, which meant fewer people focusing on deporting the longtime illegal immigrants living in the interior of the U.S. And she said the lack of cooperation from states, counties and cities when agents ask them to hold an illegal immigrant for pickup has also hindered efforts."

The Washington Times is a right-wing rag, which was founded by Unification Church nutjob Sun Myung Moon. It's about as factual and objective as FOX News.

Extra-Legal?" I guess it got lost in translation. Didn't the pope mean, ILLEGAL?

When the pope visited, I didn't see him being concerned with giving compassion to US Citizens who are poor, uneducated, who have lost their jobs to Illegal Aliens. This effect was warned about in 1965:

“In light of our 5 percent unemployment rate, our worries over the so called population explosion, and our menacingly mounting welfare costs, are we prepared to embrace so great a horde of the world’s unfortunates? At the very least, the hidden mathematics of the bill should be made clear to the public so that they may tell their Congressmen how they feel about providing jobs, schools, homes, security against want, citizen education, and a brotherly welcome… for an indeterminately enormous number of aliens from underprivileged lands.” “We should remember that people accustomed to such marginal existence in their own land will tend to live fully here, to hoard our bounteous minimum wages and our humanitarian welfare handouts…lower our wage and living standards, disrupt our cultural patterns.” Myra C. Hacker, Vice President of the New Jersey Coalition of Patriotic Societies, on the 1965 Hart Celler Act

“Whatever may be our benevolent intent toward many people, the bill fails to give due consideration to the economic needs, the cultural traditions, and the public sentiment of the citizens of the United States.” Myra C. Hacker, on the 1965 Hart Celler Act

Also, isn't it interesting that the catholic church is one of the largest recipient of financial "donations" in the world? If the pope is so concerned for these migrants, then why doesn't he exhort those countries (including his native Argentina) to take care of their citizens in need?

"Not to be lost in the pomp and circumstance of Pope Francis’ first visit to Washington is the reality that the Catholic Church he oversees has become one of the largest recipients of federal largesse in America."

Most Evangelicals are against Illegal Immigration:

"There are biblical and prudential reasons for opposing "comprehensive immigration reform," but your otherwise thoughtful article did not acknowledge them.

I concur with the statistical conclusion of Kellstedt and Hoover, that evangelicals, "white" and otherwise, largely oppose the kind of "comprehensive immigration reform" that President Obama is attempting to enforce despite the disapproval of Congress and most Americans."