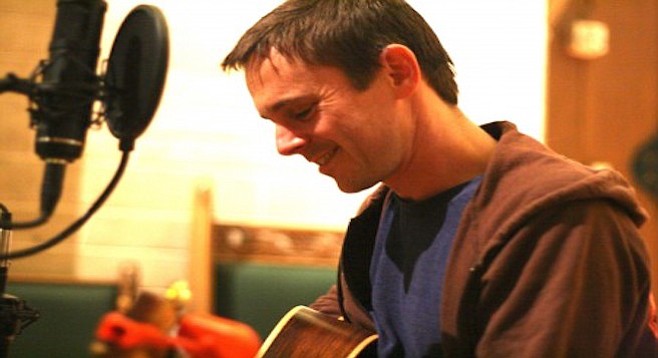 You're not in for a happy-fest with Glen Phillips

The glaring red eyes of the fiberglass shark suspended from the ceiling of Belly Up Tavern menace the musicians onstage. After his first tune, Glen Phillips said this opening song should leave him inspired and loose enough to launch a freeform solo show. Instead, he felt fear.

Glen is an earnest songwriter, and while he verbalized insecurities between songs, he performed with confidence and nuance. With a set list including “Trainwreck,” “Something’s Always Wrong,” and “Let It Fall,” you’re not in for a happy-fest. Phillips has battled depression, and there’s an incongruity to his disheartened lyrics paired with blissful chord progressions and soaring vocals.

Bluegrass powerhouse Sean Watkins opened the show and returned to perform some tunes with Glen — some from their Works Progress Administration collaboration. Having a friend onstage helped Glen chill. He even launched into a few political rants: “Social democracy is not about the USSR, it’s about Denmark.”

While confessing to be tired from hours on the road, it didn’t show in this thick set from an old pro. Along with sad songs, Glen served up positivity and encouragement. He reminded us that love overcomes fear.

Evocative review, well done - almost feels like I was there (wish I had been!).