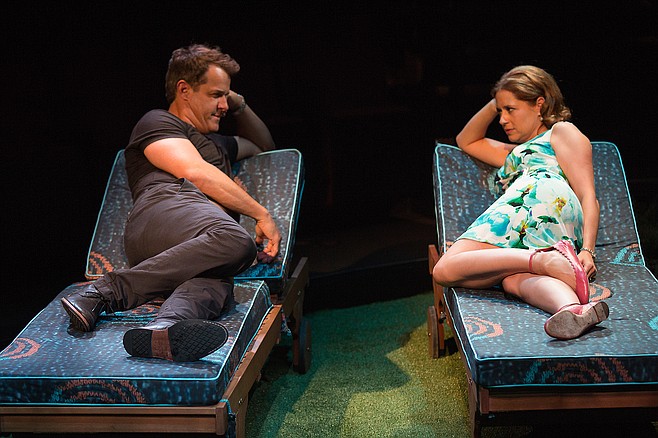 Meteor Shower — this is a play by Steve Martin, after all

One night in Ojai...

So many playwrights use the device, it’s almost a genre in itself: Friendly Dinner Gone Gravely Wrong. In Steve Martin’s world premiere, Meteor Shower, things fall apart, but in different versions of the same event, as if the hosts and guests slip in and out of parallel universes.

Norm and Corky Kukendahl invite Gerald and Laura Newman to dine at their Ojai home. It’s 1993. After a meal and a bottle of wine — valued at either $80 or $5, or neither — they’ll watch the Perseid meteor shower streak across the heavens (and streaking in a sky near you through August 24).

They’ll relax, get acquainted, and, Norm hopes, forge an in with the wealthy, influential Coopers. Gerald already has one, and he and Norm are tennis buddies, though they know more about foot-faults and top-spin lobs than each other.

Married 19 years, Norm and Corky live a “low-key” lifestyle. So low-key, in fact, neither may have a subconscious, or at least not Corky. Part ditz, part physics phenom, her innocence verges on pre-apple Eden — though she was a cannibalist, come to think of it. In any event, Laura suffers from “Exploding Head Syndrome.” A mere soupçon of stress and she’s all, like — ka-bloooey!

If anything upsets either, they grasp hands, lock eyes, and utter scripted affirmations of each other’s right to exist (you can almost hear Al Franken’s old Saturday Night Live character Stuart Smalley: “Because I’m good enough...and doggone it, people like me”).

Norm and Corky need to “discuss the experience.” The Newmans are so blazingly in the moment they burn a hole through it. For Gerald, whose ego stretches from Ojai to their Santa Barbara home, instant gratification takes too long. He measures “now” in milliseconds.

Statuesque wife Laura — of 12 years with six months off for bad behavior? — moves slower, by comparison, but surer. She bats 1.000 at getting her man.

There’s much talk about “the person you are” and “the person your real self wants to become.” This was one of the self-help, fictive-you vs. authentic-you banners of the early ’90s. Norm (as in “normal”?) and Corky have the faith. They ardently confess each faux pas as if to a priest.

So, if Norm and Corky are admittedly incomplete, are Gerald and Laura (“new man”) models for their real selves? Or agents for growth? Or are they — this is a play by Steve Martin, after all — Norm and Corky’s subconscious in the flesh?

Could be, though it’s hard to tell. Once Meteor Shower gets going it plays like a pastiche of familiar absurdist techniques, in particular the early one-acts of David Ives (Time Flies, All in the Timing), which spin variations on a theme and where the bull could be the China shop.

In one variation, while walking toward the door, the Newmans plan their strategy: break down the hosts, unblock intimacies. But then again, is this to help Norm and Corky grow, to prompt havoc, or, bathing in their own narcissism, to refashion the hosts in their own image?

You can figure out Meteor Shower’s destination, in hindsight. Norm and Corky connect with their sub-selves and forge a psychological balance — somehow.

The journey’s also a muddle. The play unfolds as if someone else wrote the script, a pseudo-surreal, pseudo-psychological comedy about dull Yuppie couples caught in a fractal Twilight Zone. The script didn’t work, so they called in Steve Martin to punch up the dialogue with wilder and crazier bits.

And Meteor Shower is funny (as when Laura tells Corky, “I just get tired of being artificial. Don’t you?”). Jokes and comic situations move the two-act show along but can’t erase the puzzlement of why we’re here. One wonders, as Norm asks, is this a “non sequitur or a sequitur?”

Michael Yeargan’s set splits the Sheryl and Harvey White in-the-round theater in two: an autumnal hued, Architectural Digest–worthy interior on a polished, hardwood floor; a lawn outside, with chaise lounges and a meandering walkway (but not much of a meteor shower, just the occasional flashing light, accompanied by a “wow!”). The play craves the symbolic, though at the expense of the real. Put a wavy line down the middle and you’ve got a yin/yang symbol of opposites — and an overstatement in keeping with this overstated, albeit funny, mish-mash where the take-home is the most absurd of all.

Playing through September 18; Sunday, Tuesday, and Wednesday at 7:00 p.m. Thursday through Saturday at 8 p.m. Matinee Saturday and Sunday at 2 p.m.