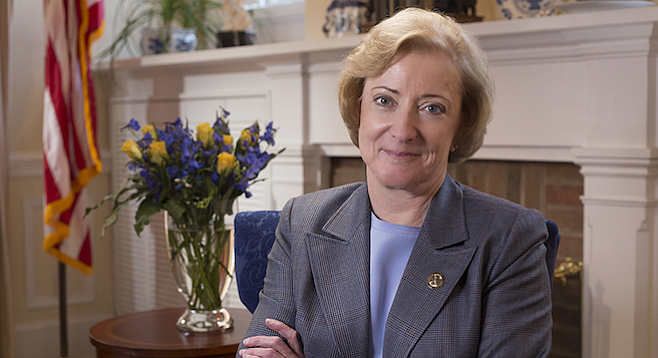 As La Jolla billionaire Irwin Jacobs and Qualcomm cohorts continue private talks with San Diego mayor Kevin Faulconer over naming rights to the billionaire's mammoth Balboa Park road and parking-garage plan, can another super-rich Qualcomm executive up the company's political cash ante even further by financing a seat in Congress for his wife?

Such is the question raised by disclosure that Qualcomm senior vice president of development Mark Epstein has so far spent $2.1 million on a personal political action committee he calls Maryland U.S.A. to get his wife, Republican Amie Hoeber, elected to the House from Maryland's District 6 over Democratic incumbent John Delaney. 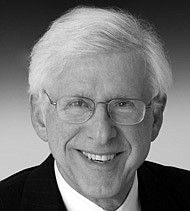 "Unlike a candidate’s personal campaign committee, which has strict limits on the amount of donations it can accept from anyone but the candidate, Super PACs can take unlimited contributions from individuals and corporations," noted Bethesda Magazine last month.

"Super PACs and other independent expenditure efforts are barred by law from coordinating their activities with a candidate’s campaign committee — notwithstanding that, in this instance, the candidate and the donor underwriting the Super PAC happen to reside under the same roof."

The Maryland U.S.A. PAC has also drawn notice from campaign spending watchdogs, who have pointed out how the cozy nature of the husband-and-wife arrangement skirts federal campaign disclosure laws.

According to a Qualcomm news release, Epstein was deputy for communications, command, control and Intelligence in the office of the Secretary of the U.S. Army, "where he was responsible for the U.S. Army's communications, surveillance, electronic warfare and intelligence systems," during the Reagan administration. He was hired by Qualcomm in January 1986 and became a vice president in 1997.

Epstein's wife and would-be congresswoman Hoeber is also a Reagan-era Pentagon veteran. Since then she has been a paid go-between for military contractors and others seeking government largesse.

The buying of government influence runs deep in Qualcomm's corporate culture, going back to the early 1990s, when Jacobs laid out millions of dollars of company cash to back the presidential aspirations of president Bill Clinton — and subsequently got special treatment ultimately worth hundreds of billions of dollars to the company from the Democratic president.

"US-based telecom semiconductor maker Qualcomm received a license to market its CDMA technology for cellular phones in China in 1999 because the company’s chairman, Irwin Jacobs, was a large contributor to the Democratic Party and a friend of American President Bill Clinton," noted professor Scott Kennedy, director of Indiana University's Research Center for Chinese Politics and Business in a June, 2007, study of the firm.

"The Clinton Administration made Qualcomm’s license a mandatory requirement for China’s entry into the World Trade Organization."

In January 2013, New York state comptroller Thomas P. DiNapoli sued Qualcomm, demanding "to inspect the company’s books and records to determine how shareholder funds are being spent for political purposes."

In San Diego, billionaire Jacobs's initial 2012 drive for his Balboa Park bulldozing plan was marked by a $12,000 contribution to the reelection bid of Democratic lieutenant governor Gavin Newsom, less than a month after Newsom sent a letter to California state preservation officer Wayne Donaldson, in which Newsom demanded that Donaldson "withdraw your comments" critical of the project.

Said Donaldson of the Jacobs park makeover plan, "At great risk is the Cabrillo Bridge, its setting, the spatial relationships and special elements which define the National Historic Landmark District of Balboa Park." Of the proposed parking garage, Donaldson said, "It irreversibly changes the relationship of the organ pavilion to the landscape and severely diminishes its prominent setting."

Following the Jacobs donation to Newsom, Donaldson lost his job.

Last month San Diego Republican mayor Kevin Faulconer announced that he was reviving the Jacobs park plan. Documents subsequently obtained under the California public records act show that a series of communications between the billionaire and Faulconer's office in March of this year led to a private sit-down between the mayor and the billionaire at his La Jolla mansion on March 17.

In the three weeks following scheduling of the meeting, a total of $5100 flowed into Faulconer’s reelection campaign fund from nine Qualcomm executives, including $1000 from Paul Jacobs, the firm's executive chairman and son of Irwin.

Somehow, that photo looks like a set from Saturday Night Live. And somehow, the husband raising the money for the wife does not seem quite right.