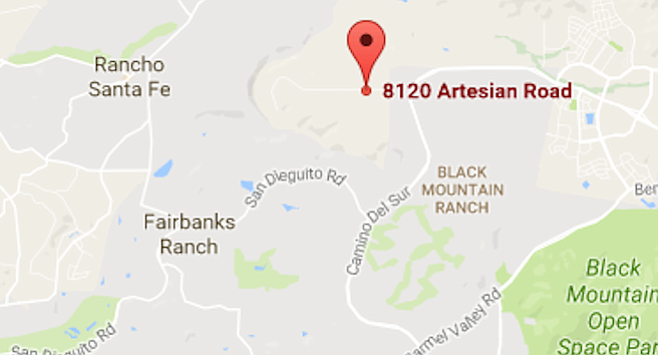 Too close to Rancho Santa Fe

What kind of business can you run on Artesian Road?

Depending on who is telling the story, Darryl L. Hronek is either building storage for the business on his property or being harassed by a vindictive neighbor who is using the county's code enforcement unit to get at him while he builds a tennis court.

"The neighbor gets the other neighbors whipped up and tells them who to call and what to say," Hronek said. "We moved out in the country so we could get away from the weirdos."

Hronek, they said, was building a warehouse on his Artesian Road property, located just east of Rancho Santa Fe and west of Black Mountain Ranch in the unincorporated community. They complained about Fed Ex semitrailer trucks backing up to the property from the two-lane road to pick up and drop off loads of stuff, and about construction that seemed to be underway, according to county documents.

Neighbors also complained that Hronek is running a business that involved multiple employees, a half dozen FedEx stops daily, and quite a bit of commercial traffic — in an area that's not zoned for that activity.

Hronek's website, MedAuction.com, shows a multitude of used medical equipment, including dermatology lasers that appear to have been photographed in a yard with stamped concrete beneath and a blue sky full of puffy clouds behind them. On the website and apparently among neighbors, Hronek uses his middle name as his surname: Darryl Louis.

Hronek, meanwhile, sent neighbors an email describing what he was building as an RV garage where he intended to store cars that he has collected. He urged his neighbors to not join in "the campaign by the terrorist next door" and invited them to come by and meet his wife and three children — two sons and an infant daughter.

Records show that multiple neighbors called in complaints, which Hronek said resulted from an email campaign started by one neighbor. He produced a copy of the email.

Attempts to reach the neighbors whom Hronek blames for the complaints by phone and email went without a response. The county does not release the names of code enforcement complainants.

County records indicate that inspectors went to the property on June 15 and found that "the owner was operating a business out of his home and storing medical supplies in a detached garage and two pod containers," county spokesman Gig Conaughton said. The inspector issued an administrative warning, but at the same time told Hronek that businesses are allowed if they are "entirely within a building containing a residential use or an attached garage."

"Code enforcement also talked to the owner about the possibility of coming into compliance with county regulations by successfully applying for a minor use permit for a "cottage industry," Conaughton said. He noted that such a permit would require a reduction in the level of commercial activity — for example, fewer employees.

Hronek admits that he is running a business but says the construction on his property isn't for the business.

"We spent a ton of money on this home for the privacy and to have our kids grow up away from the influence of the city," he said. "We were depressed over this systematic, vitriolic campaign by our terrorist neighbor."

Hronek produced a letter of support from a neighbor who wrote "I urge you to ....stop persecuting this young family. They are within their rights to live in their new home peacefully and run a business on their property as we all are."

The letter notes that other neighbors are running businesses from their properties and says the complaint-driven enforcement is "shameful."

Those other folks aren't weirdos. They are neighbors who don't like their rural, residential enclave to start turning into an industrial zone. Yes, it is possible to run a business, such as a law practice or consulting business, out of a home, and the neighbors would never know because it makes no noise and requires no delivery trucks.

I live in an area of Vista that is supposed to be residential and agricultural. I now have, and have had for decades, neighbors who seemed to think that this rustic zone is a "do your own thing" zone. For the most part, they manage to keep code enforcement off their backs, usually by lying about the use of the place. "Oh, no, that's not a business, I just repair diesel trucks as a hobby." Without going to war, it is just something we've learned to live with most of the time. But that doesn't make it right, or legal, or fair to those of us who really did move to the country for quiet.

Maybe he doesn't use his full name because he is a felon released from Federal Prison on 11/20/2000? From running a small coffee shack called Capone's Expresso to prison then to Rancho Santa Fe. Quite a feat. Perhaps the neighbors would like him to obey the laws.

Great digging, Ponz. This may be the first that those neighbors, or law enforcement, will know of his "checkered" background. But then, law enforcement wasn't involved. It was all about code enforcement, and they don't look for crooks, felons, or other miscreants.

We likely will learn more, much more, about this dude.

I found those criminal cases too, but for publication, well, it just hurts his family and further angers him. I did reveal his last name to his neighbors for the first time and the rest you can find by Googling. Think about what this guy is doing: trotting out his wife and kids like props, convincing himself he's being persecuted by the neighbors and the law; and best of all, buying and selling used medical equipment.

It's ironic. A felon, a former fugitive that had to be tracked down by the U.S. Marshall, wants to get away from "weirdos." It would be interesting to learn how he acquired his wealth considering he was in a long bankruptcy, before and as he was released from prison. Where does a felon accumulate enough cash to purchase a $3,000,000+ home?

Oh, he also suddenly closed a business (Platinum Laser Works) in Arizona in 2007, keeping thousands of dollars in prepaid deposits from customers.

The best defense in an offense; accuse your opponents of your own qualities and hope the accusations will stick. He's a real weirdo, so he claims his neighbors--all of them in the area--are weirdos. How's that for nerve, gall, and a host of other less-flattering adjectives?

Great story Marty, and thanks for bringing this to everyone’s attention. It is hard to believe that Darryl Louis Hronek, a convicted criminal, who was convicted twice on drug charges, being a drug ringleader and conspiracy to distribute marijuana, and has spent close to 20 years in prison, a shady character that swindled people out of their money by shutting down a business in Arizona, has the nerve of calling his neighbor a “terrorist”.

Check out his Linkedin profile that has no prior history listed before his MedAuction.com business. I wonder how many MedAuction.com customers know whom they are dealing with? He doesn’t even list his real last name on his business website.

But the main point seems to be that this nefarious character thinks the law does not apply to him and he can run a business in a residential neighborhood. He claims he wants to raise his family in the country but completely ignores that his neighbors want to live in the quiet country too and not next to an import/export business with 10+ employees, daily freight truck deliveries and all that noise. Living in the country does not mean there are no rules and regulations. The County Zoning Dept. already determined that his business is in clear zoning violation. If he wants to comply with a “cottage industry” exemption, he would need to reduce his employees to 3, use no more than 1000 sq.ft. of building space and have no negative impact on the residential character of the neighborhood. Who is going to enforce that?

This story tells me that the neighbors mainly want to make sure that Hronek obeys the laws and zoning ordinances and does not disturb the peaceful residential character of this neighborhood. If he wants to be a good neighbor he should show to everyone that he can obey the law and not turn his property into an industrial zone and call his neighbors “terrorists”.