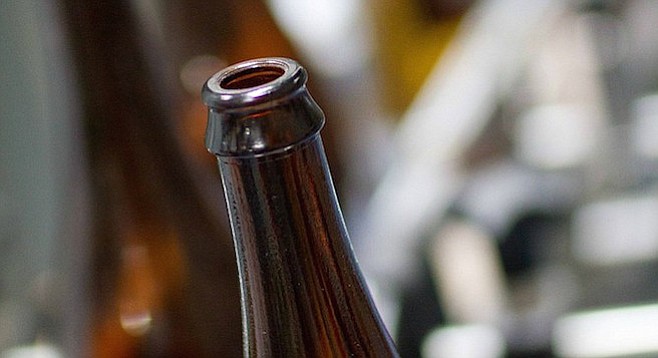 San Diego breweries get into packaging

Nine local breweries are introducing bottles and/or cans for the first time in the first half of 2016. That's only a small fraction of the roughly 120 brewhouses in the county, but nearly a 25 percent increase over the three dozen or so distinct breweries packaging prior.

In late February Solana Beach-based Culture Brewing celebrated three years in business with its first bottles — bombers of customer favorite Keyhole Mosaic IPA with grapefruit. Employees insist the limited release is tasting room only, but I found one in a bottle shop.

It only took six months for Rancho Bernado's Second Chance Beer Co. to start canning. Sixteen-ounce four-packs of Seize the IPA showed up in select shops mid-March. Its highly regarded Tabula Rasa porter will follow suit in April, and while cofounder Curtis Hawes says the team is currently deliberating on a third year-round can, they plan a barrel-aged oatmeal stout in bottles later this year.

Abnormal Beer Co. also commenced with a one-off in April, quickly selling out of six-hundred 500ml bottles of M2. Gallanosa says Abnormal is looking to bottle more consistently in the future.

Gluten-reduced brewer Duck Foot launches its first bottles mid-April. Cofounder Matt DelVecchio says the first-year company went with its best sellers, issuing year-round bombers of The Looker blonde, The Contender IPA, and ChocoNut Lust porter made with hazelnut, cocoa nibs, and milk sugar. They're self-distributing but expect to be in Whole Foods soon.

Down in Barrio Logan, Border X Brewing cofounder David Favela expects a first run of its popular hibiscus & agave Blood Saison to appear in 22-ounce bottles by May 1. with more on the way in months to come.

Finally, while bottles and cans aren't new to the Mikkeller brand, bottles of Ny Verden Olde Ale will release with Mikkeller San Diego's April 16th launch, so technically it's a new San Diego brewery bottling for the first time.