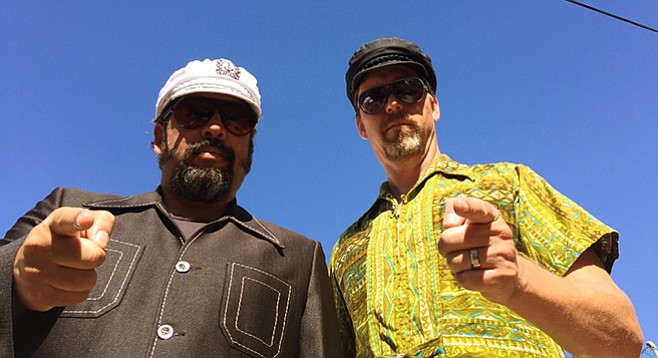 TikiTronic plays bachelor pad lounge you can dance to

It’s not Nick Rails or Pee Wee Herman kitschy. “We think the music stands on its own.” Covers by Devo, Kraftwerk, and the Ramones are refocused through exotic instruments to make quirky dance music.

Freddy plays guitar, ukulele, theremin, and the Balafon. “It’s a wooden xylophone made in Africa with gourds underneath. He also plays a wood block carved into a skull. Freddy is into electronics. He’s trying to build a volcano that will erupt with a foot switch.” Tolley uses a Micromoog from the ’70s and Simmons plays drum pads.

The second ever TikiTronic show is at the Sycamore Den Sunday, September 27.

Tolley has the distinction of being the only known musician who has played at all five of the venues that have occupied the unusually configured bar commonly known as the first Casbah.

“I first played there in 1991 when it was Casbah in a noise band called Medieval Knieval.... There was something about that location. No one lives around there. There was the whole intimacy factor. It was only supposed to hold 100 even though I’ve been there when there were a lot more than that. It was a place where you had to be good because all the other musicians were watching you.”

Tolley says he’s played at the current music venue at 2812 Kettner, the Kava Lounge, with his other active band, Alpha Channel. “I describe Alpha Channel as two guys from space. I program beats on Gameboys and a Commodore 64. The other guy plays synthesizers over the top of that. We’ve put out three albums.”