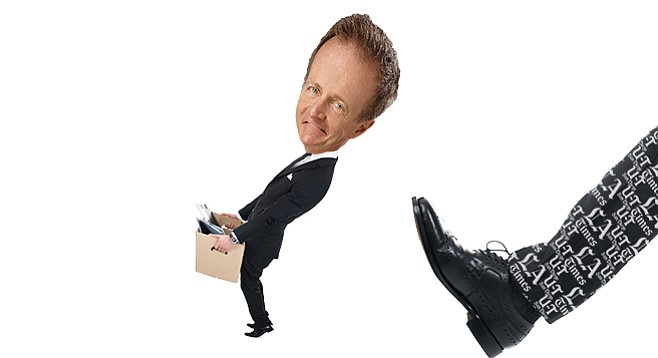 Will self-driving cars and delivery drones take your job?

Forty-eight hours before Union-Tribune and L.A. Times Democratic publisher Austin Beutner was fired last week, the U-T was out with a prescient Labor Day editorial entitled “The foreboding future of work.” Said the paper’s opinion piece: “Self-driving cars, package-delivering drones, and automated coffee kiosks have the potential to wipe out millions of service jobs.” The piece continued, “The further grim news is that it appears that there will be financial and political muscle promoting these rapid changes, even if they have a wrenching effect on society.”

Concluded the U-T’s second-to-last editorial under the now-unemployed Beutner: “The silver lining in this cloud is the hope that democracy rises to the challenge posed by this economic revolution — that our leaders find a way to maintain a broadly affluent society, one that uses lifelong career education opportunities to keep job skills fresh and that creates strong incentives for job creation.”

Editor Jeff Light can claim credit for the Union-Tribune’s most optimistic quote of the week: “There is a lot more stability here than you might assume,” he told the paper. ... Loyal U-T readers observed that during Beutner’s last days the U-T website had been increasingly linking to stories carried by the online version of its sister publication, the Los Angeles Times. In at least one case last week — the bankruptcy of supermarket chain Haggen — the story wouldn’t appear for U-T subscribers unless they purchased a subscription to the Times. The glitch was subsequently remedied.

It made headlines when Beutner’s firing was tied to reports that Los Angeles billionaire Democrat Eli Broad had made a bid to take over both the U-T and the L.A. Times in the weeks leading up the publisher’s dismissal. A key ally is La Jolla’s Buzz Woolley, chairman of Voice of San Diego, an online news and opinion outfit, and a longtime comrade-in-arms with Broad in controversial school-reform efforts and charter-school promotion.

According to ElectionTrack.com, on April 3 Broad came up with $50,000 for the California Charter Schools Association Advocates Independent Expenditure Committee. Broad is said to still be pursuing an eventual acquisition of the two news outlets from their current owner, Chicago-based Tribune Publishing.

50 years ago it was predicted that we would be flying to work. Sounds good but totally impractical. If you think about the infrastructure required to allow you to punch in a destination and get there it will not be possible in anyone's lifetime. Drones will be the same as everyone having a personal airplane just ain't a gonna happen.

tt's quite possible that self-driving cars could eliminate many jobs. I really do not see delivery drones taking many jobs due to the regulations that are being put in place. It also does not seem practical due to the sheer number of drones that would be required. There are many jobs that can be automated. But there will also be many new jobs created so long as government stays out of the way.

Greater efficiency always benefits everyone in the long run. People have been crying that technology kills jobs for decades or centuries. Instead, it's created huge numbers of good-paying jobs. Which would you rather do... perform menial labor for minimum wage, or design and build and install and service and program the robots that replace the drone laborers? Go to school, kids...