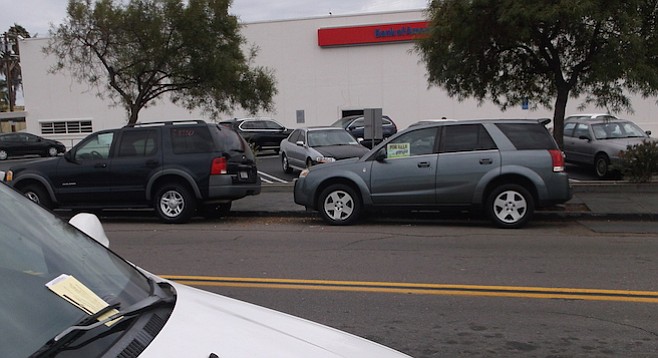 Some days — Fridays and Saturdays, in particular — the 4400 block of Marlborough Avenue is parked so full of used cars for sale that residents can't park near their homes.

"When I bought here ten years ago, there was plenty of parking," said resident Carlos Delgado. "Now, parking is so bad, that I have to park a block away most days."

On Thursday, September 10th, there were seven cars for sale in the first nine parking spaces north of El Cajon Boulevard, where the corner is defined by a Bank of America branch on the east and an auto-parts store on the west. Those cars — and the ones that fill up the rest of the street — crowd out the locals, forcing them to haul groceries and kids a block or two or more to get home.

"That place is so busy because of the bank and the auto-parts store," Delgado said. "It's wide and easy to see the cars that are for sale there every day."

Besides the parking hassle, residents also worry about the safety of the people circling the cars for sale just north of a busy intersection.

"We are going to have a trial period," said planning-group chair David Moty. "The signs go up, we wait 30 days, and then the police start enforcing."

The block is the latest in the whack-a-mole game of informal car lots.

In 2008, the city council passed an ordinance declaring 23 street segments to be no-car-sales zones. After signs went up, enforcement began in Rancho Bernardo, on Sports Arena and Midway, on the Adams Avenue bridge over the 805, on El Cajon Boulevard, as well as on Convoy Street.

Since then, city groups and agencies have sought and obtained those prohibitions for more than a dozen other areas, including City Heights, Southeastern San Diego, and Encanto; National City and Encinitas have similar prohibitions. Fines start at $77.50 per citation and police can issue two citations per day. Police can also impound offending vehicles.

What's a guy with a car to sell supposed to do? Put it on Craig's List? (Actually that's not such a bad idea--in fact it's a good idea.) I remember that Sunday car lot on Rancho Bernardo Road just east of Bernardo Center Drive some years ago. It got crazy. About a third of a mile of cars for sale, lined up on an arterial/collector street. When it stopped, it stopped. These things spring up like toadstools in your lawn, and have to be eliminated. We've even had the matter come up here in Vista, and they appear to have the necessary ordinance to "nip it in the bud" as soon as it starts. And it isn't like we want for used cars in Vista. It's No County's hot spot for established car lots.

Long ago I parked a car for sale on the nearest main street, Mt. Acadia. I got a call from the SDPD that Councilwoman Susan Golding had called and complained, and that I had to move it or be cited. I appreciated the warning. A few weeks later she plastered everything in sight with her campaign signs. I took down every one I saw, and burned them on Fiesta Island.

Know what? She won the election, and every election she entered, anyway. But it made you feel SO GOOD, didn't it?