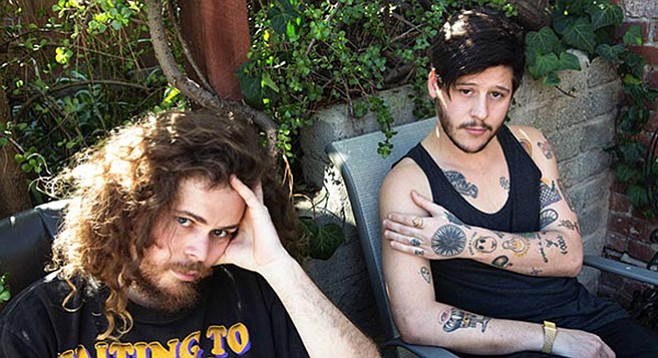 Wavves plays psych-rock for the surf and skate set

The seas may have been calm for Wavves in 2014, but the San Diego band is about to hit the West Coast like El Niño from hell, with a new album, V, hitting the shelves on October 2, and a slew of tour dates to support it.

Bassist Stephen Pope tells the Reader that the new disc is more upbeat than their previous release, Afraid of Heights. The band was apparently listening to a lot of Devo and Wire when they were putting the songs together, and the pre-release singles, “Way Too Much,” “Flamezesz,” and “Heavy Metal Detox” certainly wear these influences.

“I think it’s a much brighter record all around,” Pope explained. “The sound, the energy, and the lyrical content. We had so much downtime we were excited to get back into the studio and start playing music.... I think most of the songs are way faster, more upbeat, more energetic and fun.”

Wavves kingpin Nathan Williams snagged the backing band of the late Jay Reatard in 2009. Pope came in on bass and Billy Hayes took over the skins. Pope has been onboard for six years now, while Brian Hill (the Soft Pack) has assumed drumming duties. The band is rounded out by guitarist Alex Gates whom Pope knew from his native stomping grounds of Memphis, Tennessee. While Wavves started out as Williams’s beast, all four members now contribute to the songwriting process.

The band members live in L.A. now but make frequent trips to San Diego where Williams has his roots. Pope says the home of Williams’s parents is “kind of one of my second homes.”

So what does the gang do when they roll into town?

“Drink a little bit too much,” says Pope, “and no matter what happens, we go through the drive-thru at MXN. Get that, get heartburn, and wake up Nathan’s parents at like five in the morning banging on the door because he didn’t bring a house key. Then I’ll wake up hungover and watch his dad play video games. He plays the Final Fantasy games. He’s like a sci-fi geek, and I think he’s a professor at a college.”

The video-game bug apparently runs in the family, as Williams is an avid gamer who has had reviews published in The Fader. Pope isn’t as much of an expert.

“I’m terrible at video games,” Pope explained. “I have a PlayStation 3, and I got the Grand Theft Auto game because we did a song on that, but I can’t get past the first two things you’re supposed to do. You’re supposed to steal a car without getting caught and I get caught every time. I’m really terrible. I like to stick to Nintendo 64. I play Zelda and Mario Kart.”