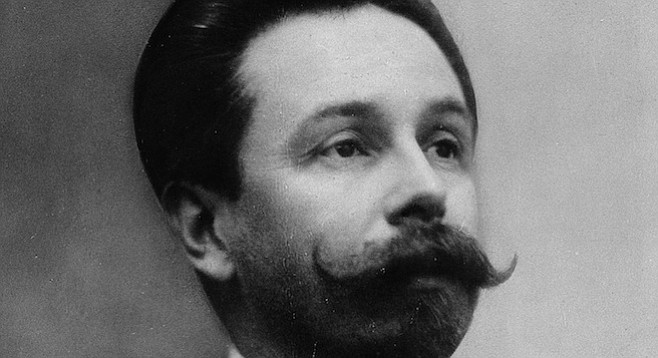 He expected humanity to dissolve into everlasting bliss

The Divine Poem is the Esoteric Pick of the Week. Written by Alexander Scriabin, The Divine Poem is his third symphony. Scriabin was best known for his piano compositions and was one of the most famous composers in the world during his lifetime.

In all, Scriabin is credited with writing five symphonies. The third, fourth, and fifth all have poetic titles such as The Divine Poem, Poem of Ecstasy, and Poem of Fire.

Theosophy, a spiritual movement created by the writings of Helen Blavatsky, played a prominent role in Scriabin's life. San Diegans are familiar, or at least should be, with the Theosophical Society. The Point Loma group was an influential element in the founding of the city as we know it.

Scriabin took the teachings of Theosophy to heart. The Poem of Ecstasy and the Poem of Fire were fragments which would be incorporated into the end of the world — literally. His mega meta-work was to be entitled Mysterium and would be performed over seven days in the foothills of the Himalayas — the birthplace of Siddhartha the Buddha.

When the music concluded, Scriabin expected humanity to dissolve into everlasting bliss. How can we not admire the grandeur of this expectation?

Where Scriabin would have gone as a composer remains a topic of interest. He died at the age of 43 from sepsis. This early death leaves the door open for any number of speculations regarding Mysterium.

For now we’re concerned with The Divine Poem. It is complete and about twice as long as either Ecstasy or Fire. The music itself sustains a standard of grandeur which may not be unique as we perceive it today.

Which composers of the symphony before 1903 compare? Mahler compares, as does Bruckner and maybe Sibelius. Those composers are household names in concert halls whereas Scriabin is not.

The Divine Poem is part of a transition period in Scriabin’s composition. It could be considered one of the final pieces from his post-romantic period which is regarded as a natural continuation of Chopin's piano music.

This short article published by the Christian Science Monitor in 1923 compares Scriabin to composers such as Satie and Schoenberg. The article postulates that as Scriabin grew as a human being, his music grew with him of its own accord. He did not despise traditional tonality but began to leave it behind.