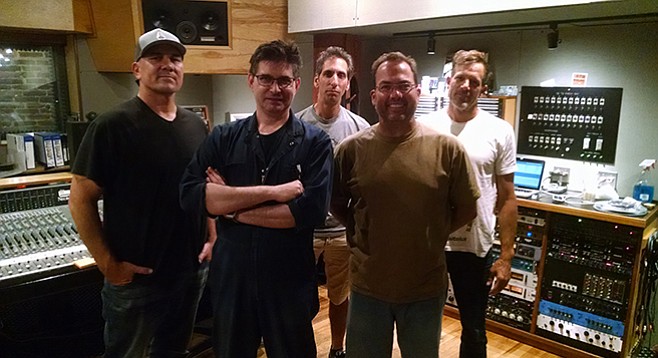 Subsurfer drops in on Electric Audio

The local singer/guitarist says he picked up the phone and called Albini at Electrical Audio, the Chicago studio he has owned and operated for 20 years.

...by Subsurfer, off of their Devil's Lounge album

“We called him in May. We booked the first available ten-day slot, which was August 12 through August 21.”

Subsurfer, which Montalbano launched in 2009, joins the Foo Fighters, Belgian noise monsters Raketkanon, and Canadian hardcore band KEN Mode on the list of bands who have recently recorded at Electrical Audio. “He’s booked all year...works six days a week.”

Montalbano says that he happily forked over $20,000-plus (which includes lodging) to record 11 tracks for his new album, tentatively titled La La La. “He’s worth it. Everything he’s worked on guided the sound I was looking for in my band. He was just voted by New Musical Express as one of the Top 20 producers of all time.”

Albini makes it clear that his role with clients is as “engineer” and not “producer.” “He is the guy who helps you find your sound. He hates people who are ill prepared. He says each band is its own producer.”

Oh, and no drugs. “If he catches you, you’re out.... He makes these ‘fluffies.’ It’s his own concoction of espresso, pancake syrup, cinnamon, and hot milk foam. It’s unbelievable. We drink those things all day.”

He says a major selling point behind Electrical Audio is that it is analog. “I will walk out of here with a fully mastered album, which he will then get pressed onto vinyl. CDs last three to five years. Vinyl will last 200.”

Coronado native Montalbano launched Subsurfer after he turned 40 and his six-year Hollywood career as an actor in TV (Silk Stockings, Renegade) and commercials tapered off. “Reality TV slowed it down for everyone.... I want to do [music] before I get too old, which I probably already am but the music is too good not to put it out there.”