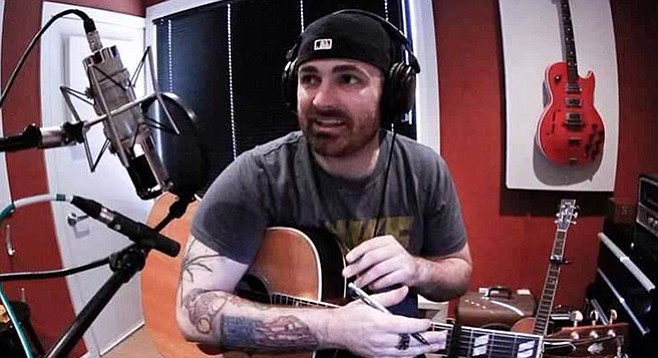 Homegrown's got a new harvester

"Just Give Me a Call"

...off of Josh Damigo's latest — and SDMA-nominated — I Will Be There

“I’ve always thought I had a good presentation and a good speaking voice,” Damigo says, and one gets a sense that now that he’s on the other side of the business, he isn’t altogether uncomfortable with the job of choosing who gets air time on the KPRI local-music showcase and who does not. “We get a lot of submissions that are the lowest quality possible. You listen to it, and you send it back and try to be nice,” he says. “And then there’s stuff like Jon Foreman’s new record — Caroline — it’s huge.”

Who else among the current harvest of locals does Damigo like? Social Club, he says, “kills it. And Juice Box. Have you heard them yet? They’re great. And everybody’s talking about Cody Lovaas. But he hasn’t released an album yet. They’re all saying he’s gonna be huge. We say, ‘All right...when?’”

Damigo admits that his outlook could potentially nix an artist from getting air on the Sunday-night show. “Let’s say there’s a band, and for whatever reason they don’t like me personally, and there’s bad blood, so I’m inclined to not play them. But Mookie says it’s a good record, play it. And in that way, he keeps it balanced.” Otherwise, Damigo tries not to get too involved in the politics of San Diego music. “I just show up with Mookie, have a good time, and go home.”

Damigo’s latest album, I Will Be There, was released in October. A local critic once noted a slight pop edge to Damigo’s otherwise singer/songwriter country-ish sound; it was apparently enough of an edge to grab Damigo a nomination from the San Diego Music Awards under the heading of Pop Music. “Okay, that’s kind of weird,” he explains. “It’s got a little twang. But what are they gonna do — put it in the Country category?” No. It works in the Pop category, I think. “But definitely not Americana.”

Otherwise, the powers that be at SDMA have made a raft of questionable category selections this year, putting unlikely artists under headings that don’t necessarily represent their work. “It’s tough,” Damigo says, “but bands take this way too seriously. It bothers people more than it bothers me. If we get nominated, cool.” (He’s been nominated at least five times in the past.) “And if not, cool. When did this become about winning awards?” says the artist who has won twice, starting in 2009 for Best Local Recording. “Winning an SDMA is not make or break,” he says. “I keep both of mine in my bathroom.”