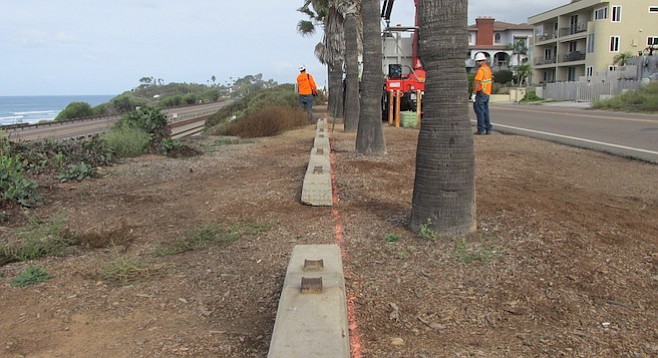 Yet, town council members would have preferred something less industrial

The unannounced project, and its unsightliness, brought on complaints from local leaders and community groups. The transit district placed the barricades purportedly for rail safety — to keep cars from driving over the bluff onto the tracks. They also placed barricades along Leucadia’s Vulcan Avenue.

Encinitas vice-mayor Catherine Blakespear said, “It made the beautiful coastal corridor local like an industrial area.” City councilman Tony Kranz concurred with his colleague, saying the concern was not only the inappropriateness of the barricades but the lack of planning or notice to the city and area residents.

Blakespear said the district is probably now aware of the need to be more thoughtful in its planning along the scenic corridor and to better address community concerns.

Now, ground-level cement railroad ties, placed end-to-end, run along the one-mile stretch of the 1300 to 1500 block of San Elijo Avenue, clearly defining the parking areas without blocking the ocean views.

Barbara Cobb, president of the Cardiff by the Sea Town Council, a community advocacy group, said of the new installation, “They look better than what was there before, but they look used, like something that was left over from some other project.”

According to North County Transit District project coordinator Dahvia Lynch, the ties were unused surplus from other rail projects. It’s the rusty metal patina of the ties, normally covered up by train rails, that make them look old.

Lynch said the replacements are a permanent solution to the district’s concerns. “Not so permanent,” said Blakespear, noting the city will soon begin planning its Rail Trail project, a bike and pedestrian path parallel to the tracks on San Elijo Avenue. Blakespear said the city will probably look at something a little less industrial looking.

The state coastal commission’s Eric Stevens, planner for the Cardiff area, said he advised the city of what might be appropriate barricades to replace the temporary orange ones, but it was up to the city to permit the transit district’s choice, under their own local coastal plan.

A construction worker on site said the Leucadia portion of the project would likely be finished next week.

Stupid drivers will find a way to get on the railroad tracks. Just watch.

Has there been an actual problem with cars getting on the tracks? Is there any documentation on this?

No, none what so ever, just "what if" scenario.

I would be very skeptical of the idea that NCTD "is probably now aware of the need to be more thoughtful in its planning along the scenic corridor and to better address community concerns." This comes across as a situation where NCTD didn't give a hoot what the locals thought, and since this the second attempt which was unsatisfactory, means they haven't learned a thing.

As far as cars on the right of way, I don't recall any instances of that. When there are cars hit by trains on the corridor, it involves crossings. A far larger issue is that of pedestrians on the right of way, and NCTD (and very few railroads anywhere in the US) has done nothing about that, save for warning signs and the threat of citation or arrest. But that doesn't keep the surf rats off the tracks anywhere near the beach, and neighbors disregard the No Trespassing signs with impunity.