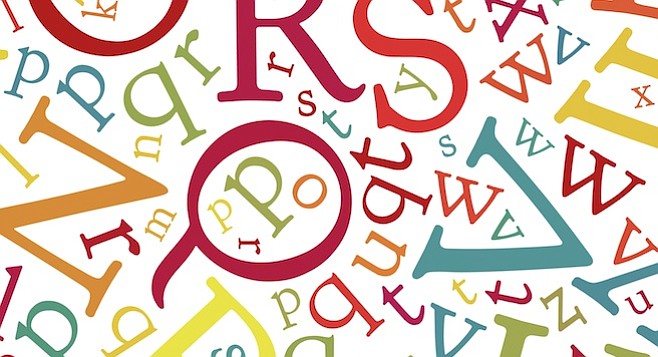 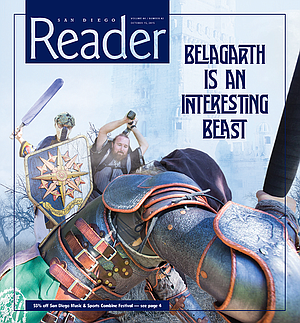 I just read Dryw Keltz’s story in the October 15 issue about something called belegarth. I grew up during World War II, and I was of draft age during the Korean War, and after that the Vietnam War. I can’t remember myself, or any of my friends — in high school, or college, or at work after college — ever having been interested in such a silly thing!

I wonder if these people will one day grow up and discover girls. It just seems ridiculous. In my day, people like that would be laughed at, not taken seriously.

The Other Side of the Tracks

Upon reading the column by Dave Good about the new streetscape of downtown La Mesa Village, I was again amazed at the complete lack of information and disregard to anyone and any businesses on the west side of the trolley tracks.

The village of La Mesa extended all the way to University Avenue on the west. By stopping the village’s boundary at Spring Street, you are cutting off over 50 small business on the west side.

Article after article (not only in the Reader; other local publications are guilty of this as well) continue to focus all attention on businesses solely on the east side of the village. It would be wonderful as a small business owner on the west to be included in interviews and engaging conversations concerning the workings of the village as a whole, not to mention the free advertisement and promotion that is granted to the businesses and owners by mentioning their businesses and names in the Reader!

I am a board member of the La Mesa Village Merchants Association as well as a small retail business owner in the village, and I am truly tired of being ignored — as is everyone else on the west side. I guess it’s just too much work to cross the street to view the life on the west side of the village.

Hopefully, next time someone publishes an article, they will venture to the other side of the tracks for some insight into what is really going on in the area.

I’m disappointed that Trader Joe’s is blowing off Clairemont residents. Not only does Clairemont’s population density require/deserve a Trader Joe’s in this huge neighborhood, but there are two great big empty spots that are convenient to traffic patterns. One is on Balboa Avenue just a couple of blocks west of 805, and the other is at the southern tip of Clairemont Drive half a block east of I-5.

Trader Joe’s cousin company, ALDI, is a poor consolation to the real thing. We experienced ALDI in Southern Florida and there is no resemblance to the atmosphere, excellent service, and interesting food that Trader Joe’s carries. I suggest that we Clairemont residents keep up the pressure on Trader Joe’s. 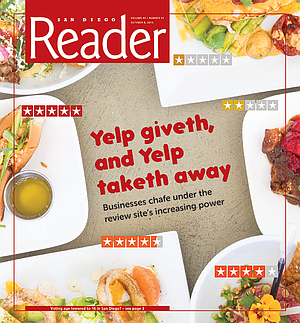 Google Is Just as Bad

Re: “Yelp Giveth, and Yelp Taketh Away,” October 8 cover story

We too have been given the shakedown treatment by Yelp (I prefer not to mention the business I am in but it’s like the pizza business, a couple of big players that dominate marketing and a bunch of independents struggling to be noticed). We had over 20 five-star reviews disappear. After numerous attempts to contact Yelp by phone and email for an explanation, our only responsive contact was from the sales department trying to sign us to a $500-$800 a month contract to advertise with Yelp.

When we asked about our reviews, the sales person said she had nothing to do with the reviews. However, she indicated we would definitely appear in a positive light and premium position if we signed up to advertise with Yelp. These premium spots was reserved for only two or three similar businesses in our market and we were one of the lucky ones for some unexplained reason. We refused this shakedown.

Google is just as bad, if not worse. The review process on Google+ is almost unusable, at least for the average consumer. So, when you see five or more Google+ positive reviews, chances are they were posted by a professional marketing firm paid some big bucks. (We receive many calls each week from Google affiliated firms offering us a “free Google verification” to keep us in a prime spot on the search engines that will only cost us $1000-$2000 a month.)

With Google they get you coming and going. You can advertise directly on Adwords or you can use one of the many firms licensed to promote you on Google (with a substantial portion of the fees going back to Google).

As marketing pros will tell you, Google and Yelp offer their services to the highest bidders and have no compunction in letting the little guy disappear. So much for the concept of the internet leveling the playing field. (See Wall Street Journal article on the pizza chains driving the independents into the ground). In Europe Google has been the subject of numerous monopoly practice investigations and legal proceedings. In the U.S. no one dare speak up for fear that these behemoths will fund a Super Pac and gang up on any legislator trying to rein them in.

It is also likely that the consumer is the real loser here with prices rising substantially to cover these marketing bills. We already see this with the major players in our business where prices often run double what we charge for the same service — and surprise, surprise, these dominant firms are owned by big Wall Street hedge funds who keep their profits offshore and their employees less than full time to eliminate benefit costs like healthcare and retirement savings. And, of course, everyone knows the big pizza chains, the dental chains, the eyewear chains, and other high-marketing- profile merchants are usually the highest cost option.

Interestingly enough, despite Yelp’s aggressive tactics reminiscence of the Mafia protection rackets, both CNN and CNBC have articles recently indicating that Yelp is on the ropes financially. This could mean even more dominance for Google, and even higher prices for a business that wants to be noticed.

Why is it that the solar suppliers only install 225-watt panels? There are larger, more efficient panels available, around 400 watts. This would leave a smaller installation footprint on one’s roof and give the same overall collection!

I’ve been waiting for a larger capacity panel for three years. SDG&E loves me for waiting. 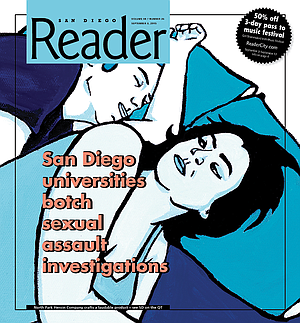 Order to the Court

An agency with quadi-judicial powers (the SDSU campus police) rushing to brand an accused person guilty after an “extensive investigation” that did not include taking evidence from anyone besides the officer who made the initial report — a single official with minimal legal training, who has almost unlimited discretion to “make findings of fact and reach conclusions of law and mete out a sanction,” while refusing to consider evidence offered by the accused.

To an imperfect driver who has suffered through “reexamination” under California Vehicle Code 13800, these procedures detailed by Dorian Hargrove will sound distressingly familiar. The DMW will revoke or “indefinitely suspend” a driver’s license on hearing a report of dangerous driving from a police officer who heard it from a “concerned citizen.” Neither the police nor the DMV hearing officer assigned to the case will do more than a cursory investigation before suspending or revoking the license. The hearing officer will conduct the investigation, decide whether to revoke the license, indefinitely suspend it or, in rare cases, to simply give the driver a warning. The hearing officer also controls the lengthy testing process whereby drivers can sometimes get their licenses back.

The opportunity to present favorable evidence, notice of the allegations against you, and a hearing in front of a noninvolved adjudicator prior to being sanctioned are all components of the due process guaranteed to everyone by the Fifth Amendment, regardless of whether the action is civil, criminal, or administrative.

Time and time again, city and state agencies, school disciplinary boards like SDSU and other quasi-judicial institutions operating outside of the court system have shown themselves to be incapable of providing the due process of law guaranteed by the Constitution. Maybe it’s time to require these matters to be handled in the court system. If that takes a transfer of funds from outside adjudicators to the courts, so be it.

Thanks to Dorian Hargrove for an excellent story.