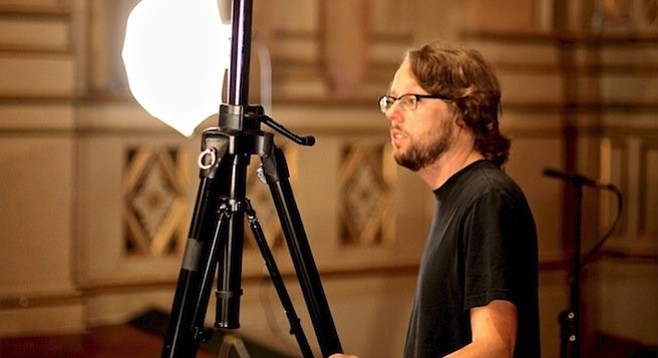 In the early 1990s, British radio disc jockey John Peel created UK stars out of San Diego’s post-punk band Trumans Water. He thought Trumans was a seasoned band that had spent years playing together. He was mistaken. On the air, members told him they had been playing together for less than a year.

Peel played the band’s first LP, Of Thick Tum, on his BBC Radio One show, and soon thereafter the band was rocking in front of thousands at Reading and Leeds. The San Diego band recorded three sessions with Peel.

Fast-forward 25 years and Trumans Water singer/guitarist Glen Galloway (who also leads the Jesus-praising Soul-Junk) plays in San Diego’s Octagrape, the band at the center of the new documentary by local filmmaker Bill Perrine (It’s Gonna Blow, Children of the Stars).

Why Are We Doing This in Front of People? follows Octagrape on tour throughout August 2015 and will be released by Perrine’s Billingsgate Media.

Octagrape, a staple in the local music scene, is a “sonic assault that comes along with the mastery on electric guitar of simple power chords and learning when to apply them for maximum effect.”

On October 30, Octagrape announced January 22 as a “solid release date” for their forthcoming album. The documentary will likely drop around then, as well. Perrine tells the Reader about the experience — the rotating band members, the self-doubt, the long drives...

How did It’s Gonna Blow lead to this piece?

“It’s a very different movie than IGB, but in some ways it’s kind of a followup to it. This is a San Diego band some 20 years after the period chronicled in IGB, and this time we get to see them actually on the road and dealing with the beauties and sorrows of touring. This time it’s fly-on-the-wall and pretty raw, rather than a historical look. And, of course, just seeing Glen [Galloway] still doing what he does is super inspiring and speaks to one of the themes of IGB: musicians making music because they want to, rather than because of any financial or practical incentives. He’s a lifer.”

What is special about Octagrape?

“Jason Begin talks in the film about how Octagrape is the sound of people discovering the guitar for the first time and just joyously making passionate noise. The crazy exuberance of Octagrape is definitely a huge part of the magic, and when they’re really on fire their shows are some of the best live experiences you’ll ever have. I’ve lost my mind at Octagrape shows. Unfortunately, it’s come back. But they’re also totally brilliant musicians and songwriters attacking the songs at oblique angles. So, it’s this great tension between chaos and order and that’s the high-wire act. That’s why they’re so amazing and also why they’re constantly on the verge of imploding. I think it’s a tough thing to keep up night after night, on the road especially, and that’s what the film is about.”

Are there any other San Diego bands in the film?

“That’s one of the great things about the tour, I think — they were playing in some really strange, eclectic lineups, and none of them had any San Diego connections, really, so they were kind of on their own.

“For instance, the show in Providence was at a bar hosting a classic car show, so there were all these greaser gearheads in hot rods hanging around. Meanwhile, Octagrape played with a folk-rock band, a prog-metal band, and a classic-rock/psych band. And the between-set music was all Bob Marley. It was surreal and great and totally nonsensical.

“Oh, I think Froberg is in the audience in Brooklyn so maybe you’ll see him. Maybe not. So maybe that counts as a San Diego band. No?”

You mentioned an uncertain aspect about the future of Octagrape. How so?

“In the past few months Octagrape has gone through two drummers and a bass player. Ely Moyal (Trumans Water) left before the tour. It’s chaos and it’s uncertainty and it’s alive, which is the essence of Octagrape. It feels like they’re transforming but I’m not sure anyone knows what they’re transforming into.

“There was a lot of soul searching on tour about the nature of what they do and whether all of the hassle of playing music is really worth it. Do you lay it all out on the line every night for people who don’t always care?

“What does it mean to play music to people? And this was aggravated by long drives, no sleep, and the usual frictions of band life. There were nights like Detroit, where pretty much everything went wrong and, as Alex said, they ‘took a shit’ onstage in front of maybe ten drunk people. And then there were nights like the Cake Shop in New York where they destroyed a packed house.

“The tour was — to coin a totally original metaphor that nobody has ever used before — a rollercoaster.”