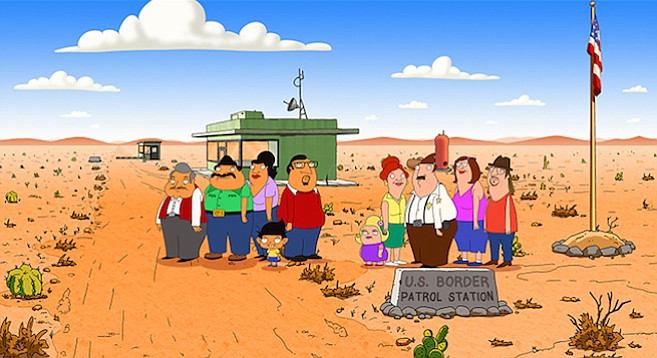 Imagine if Seth MacFarlane's Family Guy TV show got stirred around by cartoonist Lalo Alcaraz and writer Gustavo Arellano, who writes the Ask a Mexican column published in the OC Weekly… You'd end up with a TV show named Bordertown.

About 150 people got a preview Friday night (November 13) at The Front on W. San Ysidro Boulevard, an art and community space in San Ysidro. Bordertown launches on Fox in January. ("Fox television, not Fox News," Alcaraz emphasized. "They both have fiction.")

This Bordertown — “Mexifornia” — in episode six didn't look much like San Diego — except for featuring the St. John of the Cross church in Lemon Grove as the town's Catholic church. Its main characters are the family of Bud Buckwald — the world's worst Border Patrol agent, and the next-door-neighbor family of Ernesto Gonzalez, a landscaper.

The 22-minute show was what you'd expect from the Family Guy team, with Mexican references —there were raunchy jokes, an improbable plot, and the sly undermining of the men who think they head their families. (Bud complains that the Mexican man is always on top, and his wife tells him that, in her experience, if you want to be on top of a Mexican man you just tell him.)

Another notable moment: a corrupt border agent running a tunnel for immigrants in Bud's basement tells one: "Welcome to America. You may ruin our country but our country will ruin your children."

The video, and a preview of Mextasy TV, were well received, but there were people in the audience who wanted some answers. Why, for example, was Ernesto Gonzalez a landscaper? Doesn't that play into racist stereotypes?

"We deserve a landscaper that speaks like an Indian?" a viewer asked.

"My mother was from Sinaloa. She was a housekeeper. My father came from Zacatecas. He was a landscaper," Alcaraz retorted. "I am not ashamed. It's not a stereotype, it's an archetype."

Alcaraz and Arellano previewed the show to the community after producer Mark Hentemann showed the trailer around and got this reaction: “Where can I sign up to boycott this show?” Alcaraz said.

So he decided to take it out to the real Mexican-American community and tell the story of how it's being made and who's making it.

All the voices — except Hank Azria doing Buckwald — are by Latinos. There are now 5 Latino writers on the 14-writer crew, which could be a record for American gringo TV.

"The jokes about sex were easy [to get in]; the political stuff is what Lalo and I had to fight for," Arellano said. "If you're going to have a show about Mexicans, it has to have a political undertone."

Another concern: Where's the abuelita? Alcaraz was delighted by that question because there is an abuelita, the grandmother fixture in many Latino households. "Neither side of the family knows which side she's from," he said.