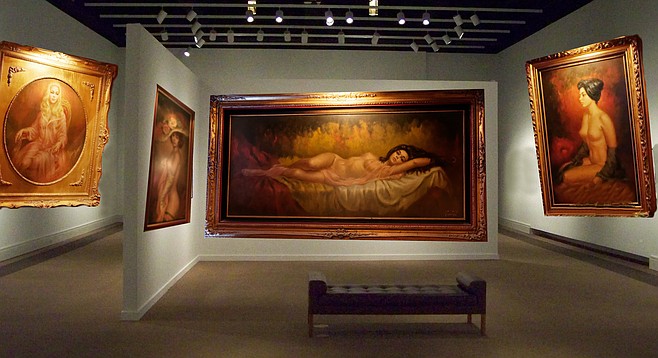 When the word came down that Albie's Beef Inn in Mission Valley was scheduled to shut its doors for good, few people wondered where they would go for Steak Diane or a chance to croon "It Had to Be You" in public. But everybody wondered what would become of the ladies: Larry "Vincent" Garrison's tastefully tacky nude portraits of PSA stewardesses.

"We had offers from all over the country pouring in," reports Beef Inn owner Ron Mailgaise. "I could have retired on the money people were pushing at me. But you know how you sometimes think it's a damn shame when a guy marries a beautiful girl and takes her out of public circulation? That's kind of how I felt about these girls. For decades, they've been generously sharing their goodies with anyone who wants to come in and buy a drink. I couldn't imagine them disappearing into some rich guy's man cave forever. This was part of our city's cultural patrimony, and I wanted it to endure."

Happily, just as Mailgaise was experiencing his aesthetic cris de couer, San Diego Museum of Art Director Roxana Velasquez was having a crisis of her own: declining revenue and attendance. "There was a real feeling here at the museum that we had somehow lost touch with the larger San Diego community," she admits. "Instead of serving as a vital resource, we had become, in the public eye, a place to store pictures that were made before there was YouTube. We needed to become a local destination. When I read about Albie's closing and saw the gallery-ready frames on those nudes, a light just went on."

Albie's Airline Angels: Cheesecake at the Beef Inn, 1962-2015 has been drawing capacity crowds since it opened on November 3. There has been talk of a traveling exhibition, but some out-of-town critics aren't willing to wait. New York Magazine's Jerry Saltz recently Tweeted, "Off to SD to look at art. Somebody pinch me."

hahahaha. After years of satirical comment, some READER readers still don't "get" Mencken's wit. Jonathan Swift probably had the same reaction in his day.

Another IQ test that I failed miserably.