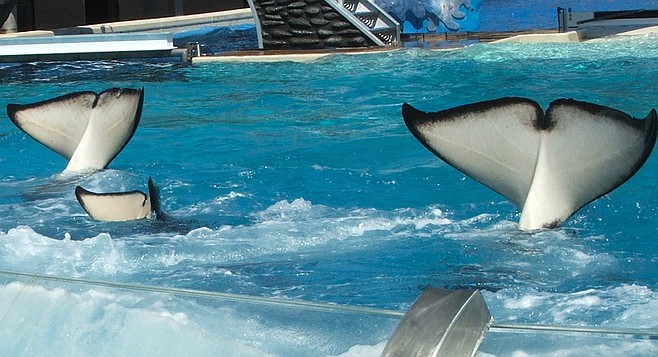 "I've been coming to SeaWorld with my children for 10 years," says Del Mar mother Sandee Momstein. "But after learning about the perverted antics of their main attraction, I don't think I'll ever come again. Not while those…those animals are still around."

Momstein was referring to the fact that Taku, a male killer whale calf living at SeaWorld Orlando, mated with his mother Katina and produced an offspring, Kalani. SeaWorld says the event was the result of unexpectedly early development on Taku's part, and that it generally takes steps to avoid inbreeding, but that's not good enough for moms like Momstein. "How am I supposed to teach my children what's natural when these whales are behaving in such an unnatural fashion? If it can happen in Florida, it can happen here. I'm just glad to the Coastal Commission has the good moral sense to put a stop to this kind of behavior."

Ditto, Carla Porter, ditto.I am not only more cautious and hesitant to patronize places that keep animals in permanent captivity, I just don't go there anymore. Ever.

Human evolution is a constant struggle with honoring old traditions and enlightenment. On the path to making our societies better and our duty to help the species we share the planet with safer, we often have to abandon practices that were once considered entertaining. Would you replace Sea World with bull fighting? Would you like to see the camel rides return to the San Diego Zoo? Is cock fighting okay? It's time to see through the smoke screen that Sea World employs and realize this marine mammal freak show has got to stop. It is not natural to make animals do tricks for their food. This seawater circus is not teaching our children anything. It's time for SeaWorld to close. Please stop attending it and please share with your visiting friends and tourists not to attend. If you have mutual funds or other investments that might hold stock in SeaWorld, sell them and/or ask the fund to divest of SeaWorld. Contact your lawmakers and ask them to terminate the lease of public land to SeaWorld.

RE: "This may be one of the most idiotic stories i've ever seen. Moral outrage over the mating habits of whales." etc. etc. It constantly amazes me that readers of "SD ON THE QT: ALMOST FACTUAL NEWS" don't understand that it's satire.