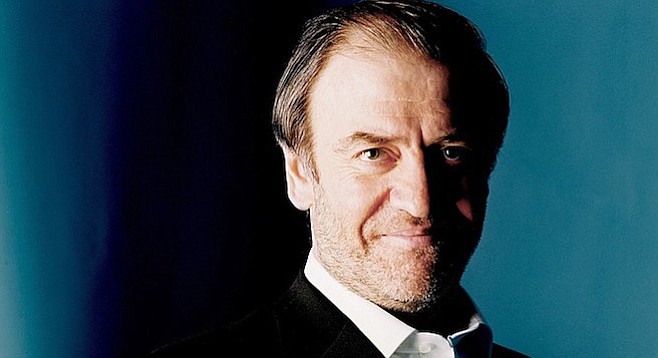 Cold war politics are back in music

YOU CANNOT START WITHOUT ME - Valery Gergiev - Maestro Trailer

Valery Gergiev, our conductor in video number three, has been accused, in the media, of being pro-Putin and for anti-gay laws in Russia. An article of defiance showed up in The Guardian at the start of the 2013 London Symphony Orchestra season.

I don’t think the intention was to be hilarious. However, the protest prior to a Gergiev led-concert involved sparkles and signs which said — and this is real — "Sparkle for freedom in Russia. Putin suppresses, we sparkle." The author then went on to express how Gergiev needed to be held accountable.

That’ll teach Putin. We all know how powerful a sparkler can be in the hands of the chronically sedentary audiences of symphony orchestras.

That article was written in a somewhat free society where it's perfectly acceptable to be gay. But personal freedom is not good enough. We in the West (yes, the Cold War terminology is back) want someone who is not in a free society to take up our causes?

Putin was KGB, which means he may have killed people himself. Another public figure, billionaire Mikhail Khodorkovsky, stood up to Putin and spent 10 years in jail. Why in the world would Gergiev risk his entire career and his freedom for someone else’s agenda?

In 2014 Gergiev reassured the West yet again that he is not an evil abuser of homosexuals. This time it was in a letter to the patrons of the Munich Philharmonic. He is currently in his first season as Munich’s music director.

We have our own issues in the West such as the killing of unarmed citizens by American police forces and laws which have led to the largest inmate population in history. That’s unverifiable but it’s hard to imagine any culture having more peacetime, legal prisoners under the law, than the 1.5 million that the U.S. has. Yet American conductors aren’t being protested and they’re not writing letters to patrons reassuring them that they believe in equality.

Is anyone intimidating American conductors with sparklers trying to get them to condemn a system in which one in three black men will be in prison? U.S. conductors should be held to the same scrutiny as Gergiev since 12 states still have anti-sodomy laws.

The problem isn’t oppression. We don’t care about oppression until we feel it ourselves.The problem is perception. American oppression has no face so we’re kind of okay with it. Putin is the face of Russia and he does nothing to hide the fact that he’s in charge. We’re not okay with that.