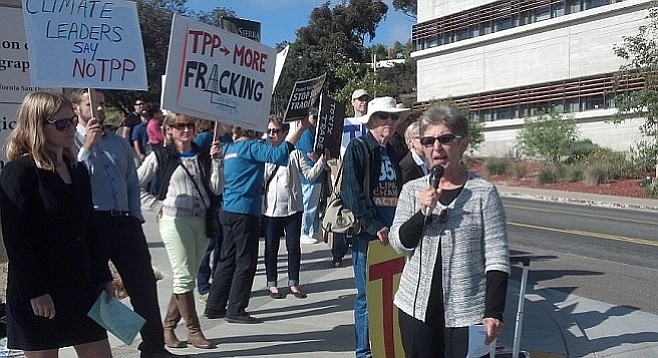 No! to NAFTA on steroids

A crowd of about 50 protesters gathered in La Jolla on Wednesday afternoon (May 27) to catch the ear of congressman Scott Peters. The group simultaneously called Peters "a champion for environmental justice" while decrying his reluctance to assure constituents of a "no" vote on fast-tracking authorization of the proposed Trans-Pacific Partnership.

The trade deal has been called "NAFTA on steroids" by detractors, a comparison to 1994's North American Free Trade Agreement that sent hundreds of thousands of manufacturing jobs abroad.

Activists have been targeting Peters as well as local Rep. Susan Davis, also noncommittal on the issue in what's expected to be a close vote on fast-tracking, which would allow negotiations on the deal's terms to be conducted without public oversight. Wednesday's protest, led by a host of local environmental action groups, focused specifically on green initiatives that could be derailed by provisions of the trade deal.

"We're at Scripps Institute of Oceanography [on the campus of UCSD] because it's the home of world-renowned climate scientists," explained biologist Emily Weir, representing San Diego 350. "These are the leaders at the forefront, gathering the data that shows us we need to be taking action right now."

The action was one of a handful planned locally this week and among dozens to be staged nationwide in the districts of Congress members seen as swing voters in what's expected to be one of only a few votes in the current Congress that won't hew closely to party lines. If passed, a new measure would provide for a five-year renewal of fast-tracking authority — Congress would be barred from involvement in negotiations and allowed only a simple up-or-down vote without amendments being offered once provisions are in place

"One provision of the [Trans-Pacific Partnership] would give multinational corporations the right to sue governments in private, non-transparent trade tribunals over environmental regulations corporations might allege will reduce their profits," warned the Sierra Club's Davin Widgerow. "No one is certain what laws will apply to these tribunals or who would appoint the judges."

Widgerow said that companies including Exxon-Mobil, Dow Chemical, and Chevron have already brought over 500 such public suits against 95 countries under existing trade agreements. The majority of those have resulted in government losses or settlements that netted large cash payouts for the plaintiffs.

"We are ground zero for the failed NAFTA agreement, and [the Trans-Pacific Partnership] is modeled after that," says Diane Takvorian, executive director of the Environmental Health Coalition.

"I was appointed by President Obama to the joint public advisory committee of the commission on environmental cooperation," Takvorian continues. "This is part of the environmental side agreement that was also critical in how they sold NAFTA. They said we'd be getting some environmental protections — well, I'm here to tell you that after three years of serving on that committee, there are no protections. This is a committee that has no teeth, no authority."

The rally concluded with speakers calling on attendees and other concerned 52nd Congressional District residents to phone Peters and express their desire that he vote against fast-tracking. Several attendees took action immediately, resulting in Peters’s office receiving at least one voice mail of the assembled crowd chanting slogans against the trade deal.

Fast-tracking has already passed committees in the House and Senate, with a floor vote expected in the coming weeks.

The SIO demonstration against the Trans-Pacific Trade Partnership (TPP) was a good idea. It brought public attention to President Obama's attempt to fast-track this huge business boondoggle and to the reluctance of congressional Democrats Susan Davis and Scott to go on record opposing it.

But then again, why would they? Both of them owe their elective offices to huge infusions of campaign money from local tech godfathers like Irwin Jacobs & Sons and others. Never bite the hand that feeds you. We'll see if Labor continues to support these two wishy-washy Dems, but I'm betting Labor can't afford not to.

All "free" trade agreements are bad for the American worker. Since before NAFTA groups have been pushing for FAIR trade. What really happens in these trade deals is that many workers lose their jobs while a few good jobs are created most of the wealth created by these free-not-fair deals goes to a hand full of mega wealthy individuals and corporations. Remember NAFTA? Just one of the provisions was that Mexican trucks could enter the US to deliver goods AND US trucks could do the same in Mexico. The Mexican trucks crossed the border but the US trucks never could go into Mexico. Many American truck drivers lost their jobs and many trucking companies went out of business. All free trade deals are just like the trucking provision of NAFTA. They are all one way streets INTO the US market and very little goes that-a-way. Always at the expense of the American worker.