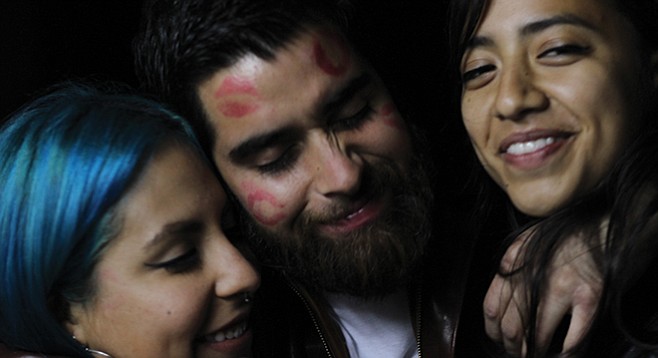 Derek, 11:46 a.m.: “It might be later than we originally planned cuz I have to go to the hospital. But I will be there.”

Danger Dave about to hang a party balloon from the gate

By five we were grilling carne asada at David’s mother’s villa next to a downtown Tijuana cemetery. Danger Dave was turning 25, so to celebrate we booked a bunch of bands to play in the backyard. My roommate Matt rented a porta-potty, I picked up a few pounds of flank steak, David’s aunt prepared a heap of beans and salsa, and my gringos Joe and Ryan brought a case of beer. Pedro showed up a while later with a pot of homemade ganja butter beans, which he placed on the grill and stirred with a stick while jokes circulated about psychoactive flatulence. Just as the first round of tacos and stoney beans came out, Derek and his bandmates in Seyoncé rolled up. The party was on.

Lightworks’ set was so good he had to play it twice

Me Gusta started the night rocking the Power Rangers theme song followed by Syrup and the Whig Whams. Beach Goons (who are all about 16 years old) capped a set of ’verby surf punk with a cover of Blink-182’s “Dammit.” Under ordinary circumstances, my auto-smug would have activated within the first measure, but instead the tune went nostalgic, and everyone was primed to party as Josemar’s band, Some Kind of Lizard, took to the stage with blasé garage anthems. But it wasn’t until Seyoncé started writhing around that I realized what a shit show the party had become. Derek, pale as a ghost from the norovirus or whatever, howled like a hurricane as he traded off guitar and bass with Elias, whose other band, Groms, prophetically released a song called “Condom Piñata” over a year ago. Meanwhile, drummer Cameron oozed blood from where he’d slashed his lips chugging a shattered 40 an hour or so earlier. Punk rock ain’t no bitch, Mom!

Derek laughs in the face of death

Eddie G and the Impossibles Club churned out psychedelic sludge, Rever jammed blues, and I ran into David at the peak of his birthday bliss. One thing you have to understand about David is that he’s a rock and roller. I’m fairly used to seeing him in black eyes and scabbed knuckles, but tonight his face was pummeled with red lipstick kisses, which covered his cheeks and forehead.

Closing the night, San Diego beatmaker Lightworks got the crowd so riled up that when his set was over, everyone cried “Otra!” He grinned and said, “That’s all I got. Should I play it again?” And he did.

Around 3 a.m., my gringos (who had disappeared for much of the night to commit god-knows what kind of carnal sins in Zona Norte) spearheaded a cleaning campaign against the yard spackled with half-empty cans, cigarette butts, rubbers, and blood stains. David’s dear mother gave us a warm farewell and we roared down to Sexta, our pockets overflowing with Mom-approved piñata prophylactics.