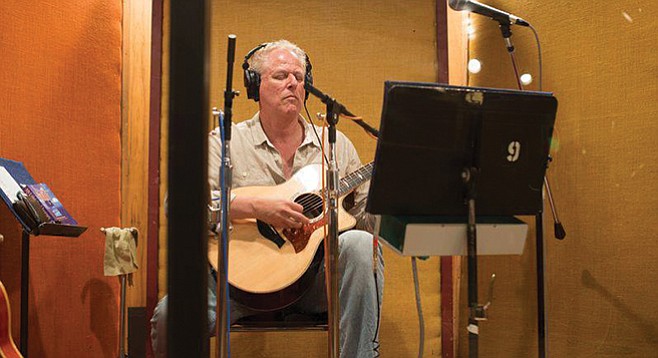 “San Diego offers the best combination of wellness, spirituality, and business opportunities for me,” says guitarist and electric sitarist Shambhu, aka Neil Vineberg, who arrived in San Diego late last year. Specializing in meditative and slightly proggy Indian-jazz fusion akin to locals like Dornob and the late Ravi Shankar, he brings with him a musical résumé that namedrops Yes frontman Jon Anderson and TJ’s favorite son Carlos Santana, as well as Whitney Houston and Clarence Clemens, among others.

“I left New York partly due to the brutal winter and intensity of daily life. I checked out possibilities in San Francisco, Los Angeles, and San Diego, and felt San Diego provided the best quality of life and value. As a Taylor Guitars artist, Taylor is also conveniently nearby in La Mesa.”

Shambhu’s local debut takes place May 18 at Croce’s. Though usually backed in concert by two to six other players, “At Croce’s, I’m going solo, looping songs from my two CDs [Sacred Love and Dreaming of Now]. Most of my songs are conceived on guitar and translated for larger ensembles. To play them solo, I have to reconceive them for guitar only. Hearing my performance will be similar to hearing a studio session guitarist laying down chord tracks, overlaying a melody, and then jamming on it. While some artists create their loop tracks before a show and press a button, I’ll be creating all this music live, one track at a time.”

When the new age player makes his local debut May 18 at Croce’s, expect unusual cover selections, such as Joni Mitchell’s “Morning Morgantown” or George Gershwin’s “Prelude #2”, the latter inspired by a performance by the late pianist Bill Evans. “Both songs are rarely played by instrumental guitarists,” he says.