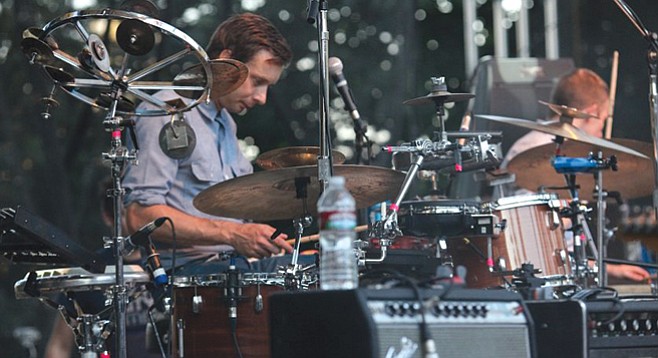 Drummer Joe Plummer's got an impressive résumé and a new record

A few years have passed since the one-time drummer for Black Heart Procession and Modest Mouse, and current drummer of the Shins and Cold War Kids, Joe Plummer, considered San Diego his part-time home. Despite taking up full-time residence in Seattle, the friendships he made here, personally and musically, endure.

Plummer is friends with singer/bassist Phil Beaumont and his wife, and drummer for Little White Teeth, Yuko Sugiyama.

“I’ve known Phil and Yuko for several years,” Plummer told the Reader from the Seattle airport while waiting to board a plane to join Cold War Kids for two shows in Aspen.

“They kept a room for me at their place for when I was down in San Diego. I played some songs with Phil’s old band, Maquiladora, and he had asked if I wanted to help with some tracks on their latest album. Naturally, I said yes.”

After spending a year toying around with the idea for a cinematic instrumental project, Plummer changed directions and decided to ask his “singer buddies” to see if they would want to sing on a few songs.

He planned to ask lead singer for the Shins James Mercer, his former bandmate Isaac Brock from Modest Mouse, and Jenkins.

“Besides doing some minor back-up vocals with Modest Mouse and the Shins, I really never got into singing and just didn’t feel comfortable with trying to sing. I had the idea of asking some of my singer buddies to put vocals on a few of the tracks. I asked Pall if he was interested and sent him one of the songs. I told him there was no pressure and left it kind of open. He sent the track back, with vocals, the next day, and then he sent another and then another. It was good and felt effortless and natural and that’s when I decided it’d just be Pall on vocals.”

“I heard words, immediately,” Jenkins told the Reader. “I wrote them down and sang on it. Each song was that fast. Within a couple of weeks, I had heard all the songs and had vocal ideas written. It just clicked.”