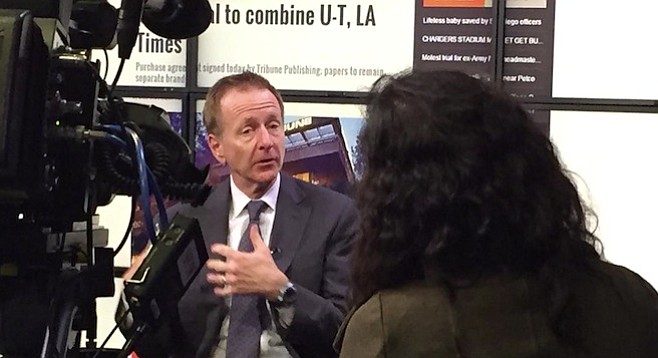 The new publisher favors raising the minimum wage and used to work with Democrats Bill Clinton and Antonio Villaraigosa. His vice president for public relations is an eight-year veteran of Barack Obama's political team.

So, how topsy-turvy will San Diego politics be under the latest incarnation of U-T San Diego, otherwise known as the once and future Union-Tribune?

The newspaper's on-again, off-again future has been hard to predict, but for local Republicans who have been used to a virtual free ride from mega-developer Douglas Manchester, the pendulum could shortly be swinging with a vengeance.

Manchester's red-blooded backing of the city's GOP has been tinged with green self-interest, so onlookers in the know aren't surprised he went for the best deal he could find, whether or not big-money Democrats supply the cash to take him out.

His six-figure campaign contributions and editorial investment in the political future of Republican San Diego mayor Kevin Faulconer paid off handsomely, with the placement of Manchester's architect on the city's planning commission and a deal with suddenly friendly city planners to lift the environmental clouds from his Grand del Mar resort.

After that bit of business was taken care of, the developer from La Jolla unloaded the posh real estate to a company run by Richard Blum, the investment banker husband of Democratic California senator Dianne Feinstein.

Having wrapped that deal, Manchester is now set to sell the U-T for $85 million to Chicago-based Tribune Publishing, whose L.A. Times publisher Austin Beutner — another product of Wall Street's wily ways — will oversee the San Diego paper.

Beutner started his professional life as a Smith Barney analyst and at 29 was inducted as the youngest partner of the Blackstone Group, the big-money capital shop that took SeaWorld public in April 2013 after loading it up with debt.

The new U-T publisher wasn't around for that, having in 1995 started Evercore Partners with Roger C. Altman, deputy secretary of the Treasury and Whitewater scandal figure under then-president Bill Clinton for two years before resigning in 1994, and a close personal advisor to Hillary Clinton's 2008 bid for the presidency. 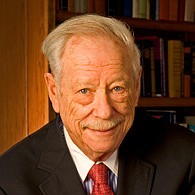 In 2000, Beutner headed west to Los Angeles in conjunction with Evercore's expansion, according to a report last August by the Los Angeles Times. When Evercore went public in 2006, Beutner took home $100 million for his share of the firm, the paper said.

According to the Times account, in 2007 Beutner broke his neck while bicycling in the Santa Monica mountains, requiring a year-long convalescence.

“As I was lying on my back recovering in the hospital, I realized I was still pretty young,” the paper quoted him as saying. “For me, it was a chance to open the next chapter.”

Democratic L.A. mayor Antonio Villaraigosa named Beutner deputy mayor of economic development in 2010. A year later he declared his intention to run for mayor when the incumbent was termed out in 2013, but the bid never got traction.

Another unsuccessful Beutner undertaking was an April 2013 attempt bankrolled by Los Angeles Democratic billionaires Eli Broad and Ron Burkle to take over the L.A. Times and seven other newspapers owned by what then was known as the Tribune Company.

''This will be a bipartisan group,'' the New York Times quoted Beutner as saying. ''It's not about ideology, it's about a civic interest.'' The would-be sale was to be brokered by JPMorgan Chase and Evercore Partners.

Beutner's group was pitted against an effort by conservative GOP billionaires Charles and David Koch to grab the Tribune papers for themselves. No deal emerged and last August Tribune spun the newspapers off to newly created Tribune Publishing, which named Beutner L.A. Times publisher and is now set to acquire U-T San Diego. Possibly next in line for Tribune takeover is the Orange County Register and the Riverside Press-Enterprise.

On a swing through the soon-to-be-vacated U-T building in Mission Valley last week, Beutner made the requisite vow of no politics in the newsroom. But the history of American papers shows that publishers often use their powers to influence, if with more finesse than did Republican Manchester, who in 2013 partnered with a Koch-linked nonprofit to produce editorial content.

One particular matter of interest under the new ownership may be worker wages. According to the Times, in April of last year the Los Angeles 2020 commission, co-chaired by Beutner, recommended that the L.A. minimum wage be hiked.

Beutner's campaign donations may also whet the desires of local Democratic fundraisers. Since 2007, according to data provided by PoliticalMoneyline.org, he's given a total of $127,000 in federal contributions, including $25,000 to the Democratic National Committee and $10,000 to Obama for America. 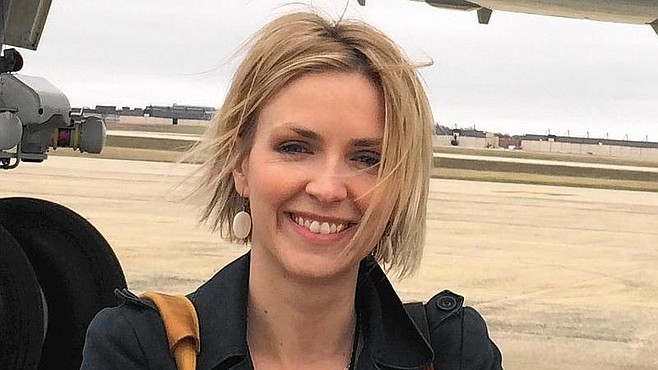 New L.A. Times vice president of marketing and communications Johanna Maska, whose appointment was announced last month, is reportedly set to serve a similar role here and for other papers that may be acquired by Tribune's California News Group.

"Johanna is uniquely skilled to help us bring the stories in the L.A. Times and the story of the L.A. Times to the world," Beutner said in an April 21 news release.

"Maska spent eight years working for Obama, starting on the campaign trail in 2007. She helped plan some of the president's signature public moments, including his victory speech at the 2008 Iowa caucus and his inauguration in 2009."

Chicken-licken, the sky IS falling! Uber-One-Per-Center Austin Beutner will be publishing our news show -- without benefit of newspaper experience or any past commitment to the Fourth Estate -- but it appears he is a certifiable Democratic dilettante and wheeler-dealer from New York City, Washington,D.C. and lately, El-Ay.

Will publisher Beutner be in it for the long run? For real journalism quality in San Diego? The only thing that's held his long-term attention seems to be his lucrative hedge fund Evercore and palling with slicksters like Friends of Bill Everywhere.

And oh-oh, how come his first in-person interviews last week were given to KPBS (with its Irwin and Joan Jacobs Newsroom) and to Voice of San Diego (which lives off sustaining Jacobs' contributions and other smaller gifts?) Jacobs is a big-name national Dem money-bundler and contributor who is always seeking more behind-the scenes political power here.

Maybe we are changing one doctrinaire master for another. May we have never deserved a great independent local newspaper. And maybe they are even going to pull the plug on the great LA Times as I have known and loved it. (Times earnings posted for the first quarter of this year were down hugely from the previous year same time.) None of this Beutner background from Matt Potter makes me feel as hopey as I did last week, even though I appreciate it.

Regional newspapers are on the way out and have been for a long time. There are so many sources for news that news papers have become obsolete. No matter who owns the UT it will fail. Most of the Democrats dumped the UT a long time ago and now the Republicans will dump it and few Dems will return. It is too bad that there really is no place to get the news not laced with opinion. Good by UT.

Alex, you stated what I was thinking. The current UT subscriber base consists of those who actually like the paper, or those who at least tolerate it. The rest of the county's population, and especially those who stopped reading it in recent years, are lost already. An abrupt change in editorial policy could very well lose those who are now keeping the paper afloat. My thought that this ownership change could result in a further big loss of readership, pooh-poohed by monahan, is very likely, and for the reasons you outline.

Warren Buffet owns a chain of newspapers that are in smaller cities (like the Tulsa World), and he invests if there's a profit to be made. So he must know something we don't. Tribune thinks they made a good buy with the U-T, even though many will say goodbye!

I suppose what you describe is possible: that the Union-Tribune's merging with a Los Angeles Times management and staff could drive off present fond U-T readers without regaining past disgusted subscribers. It's hard for me to imagine, because I read the LA Times newspaper every morning and may look at others online during the day. I would be pleased to subscribe to an improved Union-Tribune under responsible management. There's a lot of obscurantist talk surrounding future possibilities coming from wunderkind publisher Beutner himself and that too makes me worry. I guess we'll have to wait and see. As I said, the news doesn't seem as wonderful as it did at first blush.

After too many years of Doug Manchester using the UT as his personal hit, propaganda piece it will be interesting to see how The LA Times does in control. For many years most San Diegan's, "Blue or Red" have turned to our neighbors up north for legitimate news anyway. I ended my subscription many moons ago but will return now in hopes that real Journalism returns once again to Mission Valley.