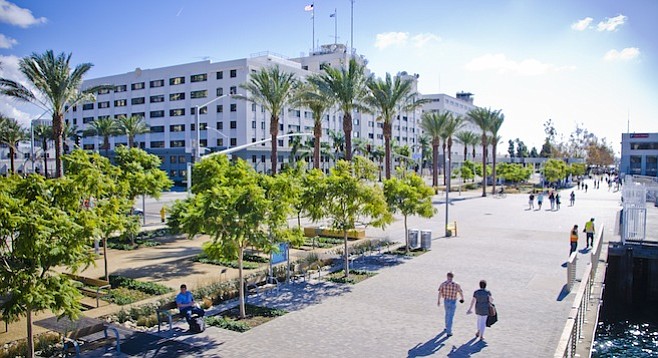 Dorothy Carroll of the La Jolla Village Garden Club was ready to offer dozens of jacaranda trees on behalf of the club to decorate the new Lane Field development along the Embarcadero. But she got into the process about 17 years too late, according to the Port Authority.

“I have to admit that the palms that they did put in there are beautiful,” she said. “I guess they have to go by what’s been decided before them.”

In 1998, the port set rules about what types of trees could be planted in the area surrounding the Embarcadero. Called the North Embarcadero Visionary Plan, the idea was to unify planning in the area, including the foliage, said Jenner Smith, senior asset manager for the port.

“After extensive public outreach, the palms were approved,” Smith said.

Before the approval of the plan, Carroll says she and others at the garden club had the idea of turning San Diego into a jacaranda garden, to make an area of downtown look similar to the cherry blossoms that bloom annually in Washington DC.

Carroll and the club thought the new Lane Field development would be a good site. But when she went to a public hearing on Lane Field on April 1 to offer jacarandas, Carroll learned about the plan to include palms.

Instead of jacarandas, the port authority selected the grand medjool date palm to line Broadway and create a majestic entrance to the city, Smith said. There are two rows of the palms lining each side of Broadway, and one row down the median.

Carroll can’t be too sad. At the pier, there is a grove of 42 jacarandas among the nearby palms. Sal Ochoa, senior project architect, said that one day the port hopes to have a jacaranda festival in honor of the trees.

“It isn’t the end of the world,” Carroll said. “Now it’s finding other sites in San Diego for the jacarandas.”

There are lots of jacarandas in North Park. Maybe they can use more.

No Thanks, NP got steamrollered by a small group that kept "discussing" street trees until at one meeting where they had a majority. Then they claimed the matter was "settled". This technique has been used to avoid what the majority wants often in NP and other parts of SD.

BTW Jacarandas only look good for a short time during the year, unlike Palms that look SoCal all year long. All streetscape drawings depict Jacarandas in full bloom which is not how they appear most of the year.