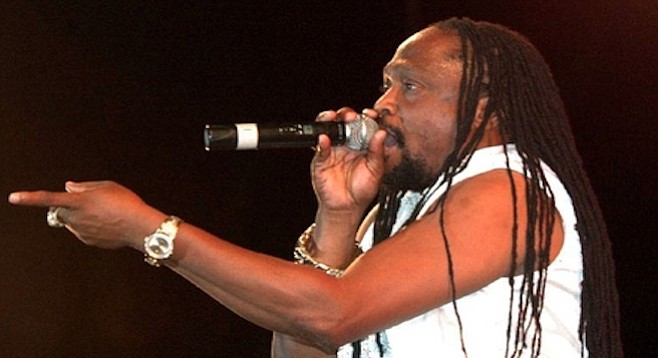 “Triston Palma has been doing this for about forty years, he was recording reggae hits as a teen and is a longtime favorite of the guys in the band,” says Revival bassist Luis Medina of their occasional Jamaica-based collaborator. “He comes to San Diego about every two years and always packs the place.”

Palma and the band first crossed paths in 2012 when Revival opened his shows at Worldbeat Center and elsewhere. After pairing the following year for area Tribute to the Legends bills, “At this point, Triston would call us directly and ask us to get ready, and it continued this way…Triston really enjoyed our enthusiasm for playing his music. Really, what we did was make it our own. It shows on our live performances. There's a great energy that he likes...he only likes playing with us when he comes to this part of the world."

Tristan Palma with Revival — "Settle Down"

Palma, who appears on Revival’s upcoming album Guidance, will fly in to perform at the record release party on May 9 at Winstons in O.B.

“Since he did two songs on our album, we figured it was a great opportunity to tie him in to the release show...I cover the plane ticket, some expenses, and pay him for the show. He’ll be here for ten days, as I was able to get him another show at Casa Sorrento in Salinas the following Friday…Triston has a lot of friends here and will be staying with a good friend of his while in town, [so] there won’t be too much time for sightseeing between rehearsals.”

The reggae star will also accompany Revival on several dates promoting the album. “He’s never been to northern California, this will be his first time up there."

The two crossover tracks on the band’s third album feature Palma’s lyrics and vocals. “We did our part at Imperial Sound Studio here in San Diego, which is run by the head of our label Roots Musician Records, E.N Young [of Tribal Seeds]. Triston has his studio and label back in Kingston, Jamaica named Star Creation where he did his parts and sent them to us for E.N to mix them.”

For the Winstons set with Palma, “We usually only get forty-five minutes, so we end up playing the most popular hits. But Triston has so many albums and songs that we never get to play other ones. So, for this show, we’ll be playing five songs that we have never done before with him.” The bill also includes SM Familia and three different DJs rotating throughout the night: Maitland Roots Sounds System, TRC sound System, and KISS 95.7 DJ Beto Perez.