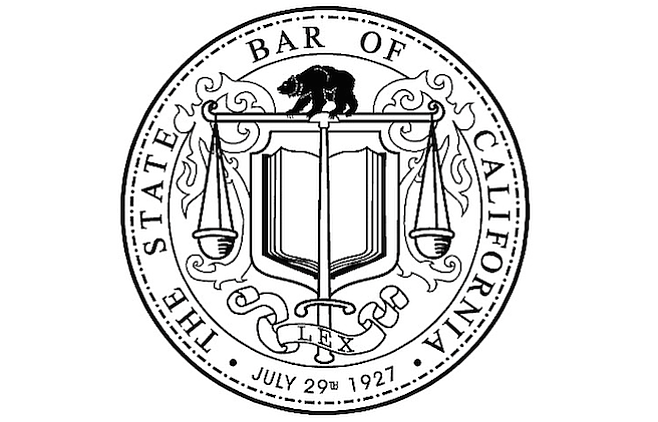 The State Bar of California has suspended Donald William McVay of Rancho Santa Fe Law Group from the practice of law. McVay accepted a client when he was not eligible to practice law, collected an illegal fee, failed to put the client's money in a trust account, failed to release the client's papers, and did not return the unearned fees. These activities constitute "moral turpitude, dishonesty or corruption," says the bar.

McVay was suspended from the practice of law in 2014, 2013, 2012, 2011, 2008, and 2006 — three times for failure to pay child and family support, twice for failure to pay bar member fees, and once for not complying with his mandatory continuing legal education.

San Diego cops talk about prostitutes after the Stingaree

The State Bar of California has suspended Donald William McVay of Rancho Santa Fe Law Group from the practice of law. McVay accepted a client when he was not eligible to practice law, collected an illegal fee, failed to put the client's money in a trust account, failed to release the client's papers, and did not return the unearned fees. These activities constitute "moral turpitude, dishonesty or corruption," says the bar.

McVay was suspended from the practice of law in 2014, 2013, 2012, 2011, 2008, and 2006 — three times for failure to pay child and family support, twice for failure to pay bar member fees, and once for not complying with his mandatory continuing legal education.

A stone’s throw from Cowles Mountain
Next Article

How does this deadbeat and grifter end up called a "Rancho Santa Fe lawyer?" Can he really live in the Ranch? Or does he merely have a RSF post office box? There's nothing in the county that says "success" like being able to claim residence or doing business in Rancho Santa Fe. As a result, some of the biggest crooks in county history are forever labeled as being from that small and ultra-affluent community.

Visduh: I have a vague recollection of dealing with a lawyer named Don McVay when I was investigating a scam a couple of decades ago.

Incidentally, I didn't mean to imply that McVay lives in Rancho Santa Fe. However, it is possible. There are some really bizarre characters there, and the place is loaded with scamsters.

Read the blog item today on J. Douglass Jennings Jr. He and his wife are in Chapter 7 bankruptcy and own two Rancho Santa Fe homes. He is under investigation of the State Bar (belatedly) and bankruptcy Judge Louise DeCarl Adler charged Jennings and his wife with willful and malicious embezzlement and/or larceny. There are other characters like them who live in Rancho Santa Fe. Best, Don Bauder

dwbat: I can remember interviewing lawyers and their clients at a law firm in Rancho Santa Fe. I don't remember whether it was McVay's firm. You and Visduh are correct that law firms and other enterprises will use a Rancho Santa Fe address and then just have a PO box there. But that doesn't mean that everyone using a PO box at the ranch is a bandit.

You can certainly get suspicious if the address is a mail drop in a store that handles mail, and mailing related matters, such as a UPS store, or the former Mail Boxes, Etc. Best, Don Bauder

I wonder why the State Bar doesn't require lawyers to reveal a business address, in addition to a PO box/mail drop address? [I know an attorney who uses a mail drop, but works out of his home. Maybe that's why.]

dwbat: That is a very good question. On most matters, the Bar is very lenient -- more like a trade association than a body that disciplines its membership. Best, Don Bauder

I also know an attorney, quite successful now, who operates out of his home. He has a half dozen office locations around the state, and actually gets mail at one of them. He's my son.

Not defending this clown lawyer, but RSF does not have mail delivery. Everyone resident and biz uses a PO Box.

Ken Harrison: I have spent a lot of time in Rancho Santa Fe through the years (a journalist specializing in scams hunting where the ducks are). I can't remember ever being informed that Rancho Santa Fe does not have mail delivery, but I don't question what you say. Best, Don Bauder

Don, Ken's absolutely correct. The Ranch itself has no mail delivery, at its choice, and everyone has to go to the PO (or send the butler) to get mail.

Visduh: Funny -- if I have been told about that, I don't remember. Best, Don Bauder

the state bar seems to be another good o'l boys club and only reacts when they have their noses rubbed in one of their members mess.

Murphyjunk: The Bar does take its time on investigations. And its bar --pun intended -- is usually low. Best, Don Bauder

One probably gets in more trouble by not paying the local watering hole "bar tab." ;-)

dwbat: It depends on the watering hole. If you frequent one in which the 6-foot-7 bartender keeps a baseball bat behind the bar, pay your tab. Best, Don Bauder

Gail Neuman: He may well deserve suspension. It depends on Bar rules.

This brings up a related topic. In a number of states, the deadbeat dad who misses his alimony or child support payments goes to jail. This worsens the problem. He can't make money while in the pokey, and will find it hard to find a job when he gets out. The family gets punished, too. Incarceration in most cases should be a way of protecting the public. But it is often punishment. And punishment that exacerbates the basic problem is not wise policy. Best, Don Bauder

Interesting. It looks like when this guy was first classified as Not Eligible To Practice Law, he left the law firm he was at and went into the investment business. He was a registered securities broker in San Diego from 2005 thru 2012 at several different firms. Apparently, he started his own legal firm when he got his license back in 2012. Now he can't practice law, again, and isn't currently licensed to act as a broker or as an investment adviser. Hmmm, a lawyer who keeps losing his license because he doen't pay his CBA dues and skips his child and family support payments. Oh, and I can't forget, Founder, Chairman of the Organizing Committee, and Founding Chairman of the Board of Directors of 11st Pacific Bank of California which the feds took over 5 yrs ago. That's exactly who I would want handling my investments!!

danfogel: In 2003, McVay is said to have had a small office at San Dieguito Road and El Apajo. That gave him a Rancho Santa Fe zip code. My source didn't know if he is still there. He may have lived at the Crosby, which bills itself as near Rancho Santa Fe. He could have lost that in his divorce, according to a second source. Best, Don Bauder

don bauder, There was an old listing for an address on San Dieguito Rd. That same address also has the Law Offices of Charles S. LiMandri, who apparently has been at that location for quite a while. Same building different suite, maybe?According to the SEC, McVay listed Alliance Legal Group as his place of employment from 01/1990 - 10/2005 and Rancho Santa Fe Law Group from 03/2008 to the present time

danfogel: He is a University of Michigan law school grad. Wonder where he went astray? Best, Don Bauder

dwbat: I don't know if he's in the LiMandri family. Best, Don Bauder

Steven Narbonne: The lawyers who will pull any dubious stunt and tell lies on behalf of a client who pays well outnumber the good lawyers. Best, Don Bauder

Gary Belzman: The people who really know Rancho Santa Fe realize McVay is not an embarrassment to Rancho Santa Fe compared with some of the others who have lived there or worked there or given it out as an address. Best, Don Bauder

I'm sure there are some bad apples in Beverly Hills/Bel Air, too.

Mike Murphy: You mean "crooked lawyer" is redundant? Even I don't say that. Best, Don Bauder

Does anyone know the status of his ability to practice law now? It says he's active on the bar association site but charges and a trial are still pending in LA County. He's in cahoots with another criminal, Betsy Elisabeth Duranty Moore, aka many other aliases, and has filed a lawsuit against me and my fiance for an unlawful detainer. This will be the sixth time she has filed, losing the previous 5 due to inability to prove she owns the house (which she doesn't). Two of those times she was put back in federal prison for forgery, fraud, impersonation, identity theft among numerous other charges from her extended career criminal activity. She's very easy to find on the internet. We were given a judgement against her in the last court case but obviously were not able to collect from her. She always files fee waivers and is granted them every time she files any lawsuit but yet can afford an attorney each time.

I would like any information on Donald McVay or any insight that anyone might have to stop this abuse of the legal system and her filing these numerous lawsuits against us. (One case was dismissed with prejudice but she is still permitted to file against us for the same reason each time.)

Much appreciation for any insight on how to stop him and her from committing constant fraud and this harassment.