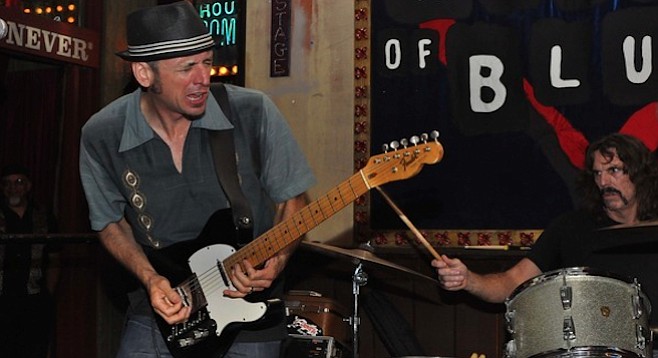 Blues guitarist Jerry DeMink has played music professionally for 30 years in front of all types of audiences. Still, he admits being daunted at a recent gig: Playing for the children at an orphanage down in Baja. 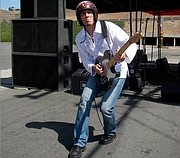 “I was a little nervous how we’d go over,” DeMink tells the Reader. “We haven’t always done well with Mexicans — except when we play ‘Ghost Riders In The Sky.’ They always seem to love that.”

DeMink’s music is more rocking than, say, a tejano toe tapper but he and the other members of his power trio managed to strike a chord with the orphans, the church leaders, and locals who attended the gig.

“There weren’t that many people there,” DeMink admits. “But the people who were there said next time we came back, they’d bring a lot of people.”

DeMink and fellow musicians Danny Wasson (drums) and Andy Baugh (bass) started playing together 10 years ago, but have been a solid unit for the last four.

When DeMink and company aren’t playing orphanages, they play local hot spots like the House of Blues and the Gator by the Bay Festival, where they will be performing May 9.

Gator By the Bay

“We’ve played it twice before, I think,” says DeMink. “We enjoy it. We get to be around other musicians. We play a shorter set than usual, but we get to give the crowd our best stuff.”

But every high profile gig that DeMink and band do is matched by a lower profile show that is more altruistic.

“We’ll do a community outreach event in North Park, and help feed people in the neighborhood,” says DeMink, whose wife, Stephanie, is a Christian missionary.

“There was a point where I surrendered my guitar for the Lord and said, ‘I’m satisfied with all the playing I’ve done and I don’t need to play another note,” Demink says. “A month later, the Lord put it back in my hand.

“Now every time I play, it’s for God’s glory whether it’s ‘Who Stole The Hot Sauce’ or ‘How Great Thou Art,’” he laughs.

DeMink’s form of musical worship is not conventional: One of his showstoppers is an instrumental that combines the guitar solos from rock classics like “Stairway To Heaven,” “Comfortably Numb,” and “Hotel California,” but it is no less sincere.

“Bending a string gives me the biggest thrill,” he says. “It’s like the line from ‘Chariots Of Fire’ where the guy says, “God made me fast and when I run, I see his pleasure.’”

The Jerry Hot Rod DeMink Band performs at Gator By The Bay at 2:40 p.m. at the Blu SD stage.