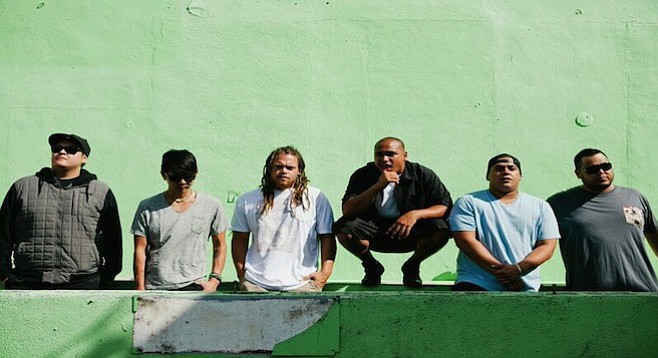 On Thursday, just after Marcus Mariota became the second pick in the NFL draft, nationally syndicated sports talk radio hosts threw out some fun facts about the Hawaiian-bred quarterback/celebrity.

They noted that the 21-year-old quarterback’s favorite musicians Include Tim McGraw and Rascal Flatts, showing that he’ll fit in just fine at his new football home — Nashville. But one band on that list led one of the national sports jocks to ask “Who are the Green?”

The Green are a six-man Hawaiian reggae band whose exposure over the years at the Belly Up, Winston’s, and House of Blues led to them being asked to play Saturday at OMBAC’s Beach Music Festival.

The Green's "Good One"

Lead singer/guitarist Zion Thompson did not know that Mariota had given his band some national NFL draft-night publicity. But he wasn’t surprised. “We knew he was a fan. People with Hawaiian ties try to support each other and the culture. Actor Jason Mamoa [Game of Thrones, Conan the Barbarian] just came back to push the cause against a new observatory on Mauna Kea. Anybody who leaves knows how good it is to leave and come back.”

Thompson told the Reader by phone from Honolulu that unlike Pepper, who left Hawaii a decade ago to live in SoCal, the Green plans to stay in Hawaii. For now.

“But yeah, we thought about [moving to the mainland]. We thought about it for years. Flights are a huge cost when you consider six guys in the band and three in the crew. Also every time we come over we have to rent a van. It would be so much cheaper if we could just own our own van.”

But then again… “It so important for us to come back from a tour and recharge and reconnect with the spirit.”

After playing with Slightly Stoopid May 16 at the Blaze N Glory Fest at the San Manuel Amphitheater in San Bernardino, the Green go back to Hawaii only to return for a July/August tour opening for 311.

Thompson says the Green is one of the lucky Hawaiian bands who can afford the 3000-mile trip. “We want to shine a light on Hawaii. We are a good reggae band but we want tell people who come to our shows about all the other Hawaiian bands who don’t make it over who might be better than us.”

Thompson says that just as you shouldn’t peg Rebelution as a Cali reggae band, the Green is not just “Hawaiian reggae.”

“We’re open to a lot of different stuff. Hawaii is a melting pot of Japanese, Chinese, Polynesian, Tongan, Samoan, Portugeuse…It’s all part of our culture.”