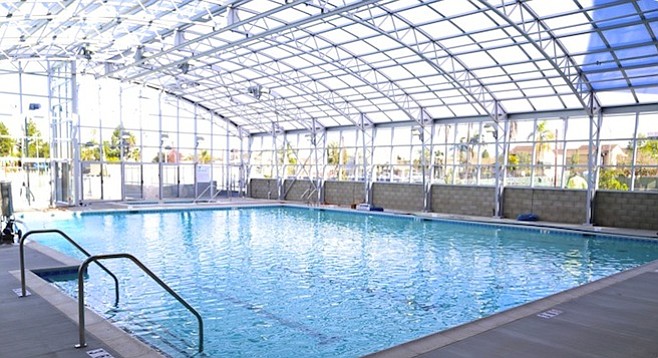 Sahra Abdi and a group of Muslim women swam in the 60-year-old pool at the Copley Y at 41st and Landis for several years. It had high tiled-concrete walls and tiny windows above the 25-yard, six-lane pool. No passersby could see inside the pool area, making it a suitable place for the women to swim in considerable privacy. But, the old pool shut down in January when the new Y opened at El Cajon Boulevard and Fairmount Avenue.

So, when Abdi and her group considered swimming at the new multimillion-dollar Copley-Price YMCA, they were disappointed to find it wouldn’t be feasible. Surrounding the new indoor pool are cinderblocks to a height of only about three feet; otherwise, the 20-yard, six-lane pool is housed in what’s best described as a greenhouse with a retractable glass roof. The outdoor pool area is visible from a sidewalk outside the fence. 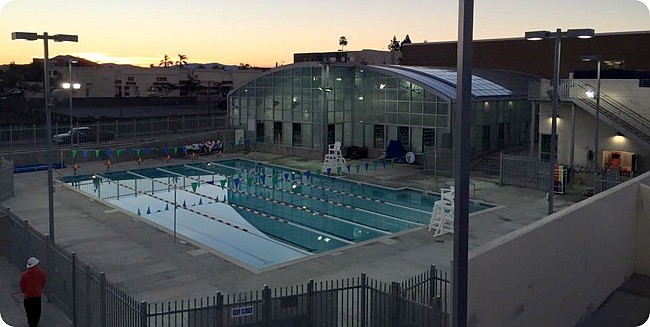 “The previous YMCA was more safe. This one was more visible,” Abdi said of the YMCA’s new pool complex.

After their pre-opening walk-through, the women thought they might have to pool their money to buy curtains to cover the glass to a height that would give them privacy from passersby, Abdi said.

But Courtney Harrness, the Y’s executive manager, had a different idea: he opened the pool after hours on Sunday nights from 5 to 7 and hired female lifeguards and security guards. The first swim night, March 22, about 20 women gathered in their swimsuits of long sleeves, pants, and head coverings. Abdi said she doesn’t think they’ll need curtains.

The swimmers pay $14 per month for the four swim nights if they are Y members, $18 per month if they are non-members. Abdi expects between 40 and 50 women will show up for the Sunday-evening swims.

Also at the City Heights Y, two nights a week is Somali Sports night, Harrness said. After hours, Somali taxi drivers gather after gym hours —from 10 p.m. to midnight — because they work long hours and can’t work out at any other time.

And late on Saturday nights, the Orthodox Jewish men of Beth Jacob Synagogue in mid-city hit the boards to play basketball. Harrness said they requested to play after hours, and the Y was happy to accommodate them.

Both groups pay fees to use the gym after hours.

I could not agree with you more, Molly. But this is what religion does; it separates us. Contrary to what most people believe, religion does not promote "community." It draws lines between groups of people and just as the YMCA is doing with the Somali girls, it reinforces our differences and pushes us all further apart. In an effort to recognize and celebrate our cultural histories, society promotes accommodation instead of assimilation and we all lose as a result. You will probably never become involved in Somali activities, and even though the YMCA is filled with good intentions, they are providing the walls that will keep the Somali girls from becoming familiar with your culture and background. Like I said, "accommodation instead of assimilation" -- it sounds good at first but actually contributes to the disintegration of a common culture. And it's all done under the guise of "respecting religious beliefs."

Every member of the YMCA has a membership photo ID card which is checked at the front for access, there are locks on all the lockers and security guards already in place throughout the day and night. It's all covered, Shonti.