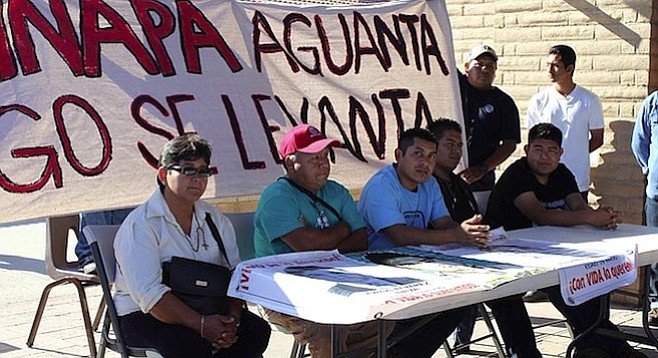 Parents speak out about their children who disappeared September 26

With the sprawling city of Tijuana on the horizon, over 100 community members attended the event, some holding signs in Spanish that read, “Mothers and fathers of the students. We feel your pain.”

Three caravans currently traveling throughout the United States will converge in New York City to speak to the United Nations. They want Americans to pressure the Mexican government to continue the search for the students who went missing September 26, 2014, reputedly at the hands of the mayor of Iguala; the group of 43 students was allegedly traveling to a protest that would have caused embarrassment to the mayor's wife.

“The main reason we are organizing the caravan is to give the families an opportunity to express their own voice about what is happening in Mexico, what is happening with the movement, and what happened to their families.” 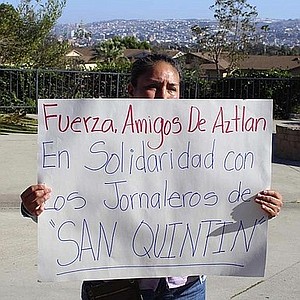 A mother, father, and uncle of the missing students were met with cheers when they arrived. Colectivo Colibri from Lemon Grove performed an Aztec dance and the all-female Mariachi Divinas sang “La Llorona.”

The mother of disappeared student Jorge Alvarez Nava, 19, then gave her message: “We have not rested since the 26th of September. We continue fighting day after day. We took to the streets and are doing marches to look for our children because the government that we have is very corrupt…. We are here to ask that the United States government demand that the Mexican government return our children alive…. The government has told all kinds of lies. We are here so that you can find out about this, so that you will not believe what they say on television in Mexico because it’s all lies.”

The uncle of disappeared 19-year-old Benjamin Ascencio Bautista said, “We hope that you will support us in raising awareness about this problem, especially because the Mexican attorney general has decided to stop investigating. Above all, we need your support at this time. There are many lines of investigation that need to be opened up.”

The father of missing student Miguel Angel Mendoza said, “We’ve already seen a lot of support from the community. From the Mexican community, all of the Latino community. Seeing all of that really makes us stronger.”

Once the families finished speaking, the crowd broke out into chants declaring the students are alive and that the battle to get to the truth continues. After, the community was given an opportunity to speak with the family members during a potluck dinner and a candlelight vigil.

Bertha Alicia Gonzalez, originally from Chihuahua, Mexico, and a San Ysidro resident for 53 years, commented, “This is where the United States begins, in San Ysidro…. They come here because they believe in the way we live and in the way the government works. They believe in freedom.”

So disturbing to think that political thugs would do harm to kids/students who were following their conscience. Hope they get home safely, soon. You should have all the support you seek to make it happen.