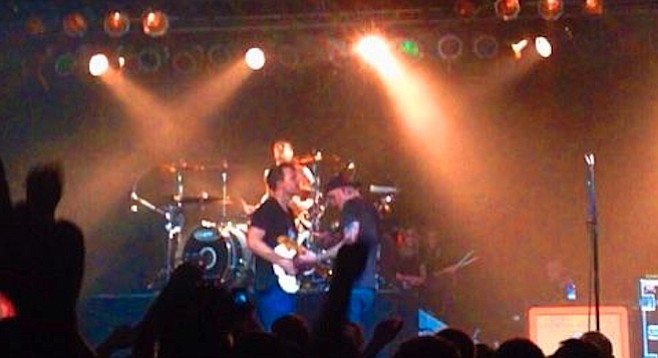 San Diego pop-punk band Blink 182 returned to their roots by playing the all-ages Soma last Friday night. Tickets for the 2300-capacity venue sold out in, well, a blink.

The buzz surrounding the concert was that it would be one of the band’s first shows without longtime vocalist/guitarist Tom DeLonge, who has been replaced by Matt Skiba, vocalist for punk-rock band Alkaline Trio.

DeLonge was one of the original members of Blink, playing an important part in their biggest hits, so the underlying question on everyone’s mind was, Is Skiba going to be an appropriate fit for DeLonge’s role in the trio? 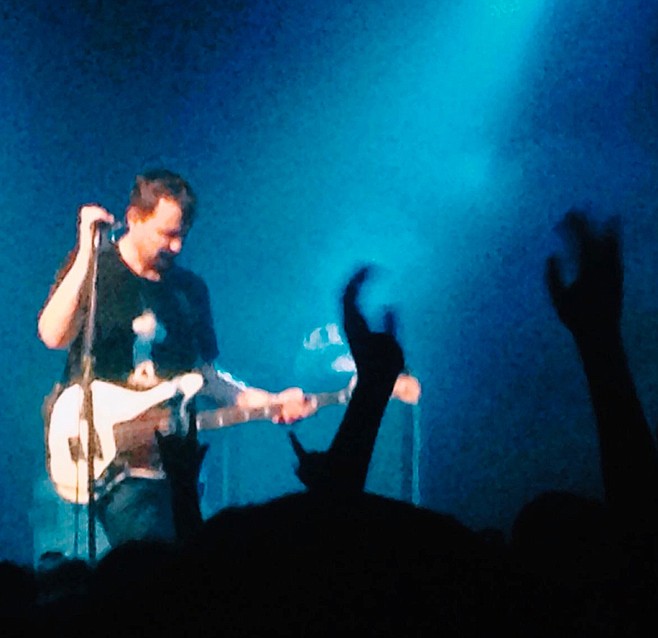 Blink erupted into their set with fan favorites “Feeling This” and “What’s My Age Again?” and any concerns the sold-out crowd might have had regarding the lineup change were immediately washed away. Skiba channeled DeLonge’s vocal style convincingly. There was a deeper sound to songs like “Going Away to College,” but it complemented Blink’s typically high-end, high-speed music.

Despite the change in personnel, there was an obvious chemistry between the three players, which included original Blink rhythm players Mark Hoppus on bass and vocals and drummer Travis Barker.

The crowd’s energy level stayed pegged in the red through a set list of more than 20 songs — some old, some new, some they hadn’t played in about ten years. Old and young fans were bouncing off each other in a number of mosh pits that opened up on Blink’s faster hits. A memorable moment in the set was when the band played their angst-y hit “Dammit” and even the security guards couldn’t resist the urge to join mass of swirling bodies that spun a big pit inside the packed room.

Humorous onstage banter between Hoppus and Skiba added to the enjoyment of the show. From claiming every song after the first five was the encore, to playfully mocking themselves when they needed to change guitars. This level of comfort and confidence in front of such a packed house broke down the wall between audience and performers. It was almost as if the band was your friend, and this was you being invited into their world. This connection is what sold the show.

Blink laid any worries about the band’s future to rest, showing its fans that they aren’t going anywhere anytime soon. It’s safe to say that DeLonge’s departure was not a door being shut for Blink but rather another one opening.

Oh, wait a second...sorry. Ignore me.

Great article....sounds like a fun show. Who took those killer pictures ? I didn't see any photo credits?