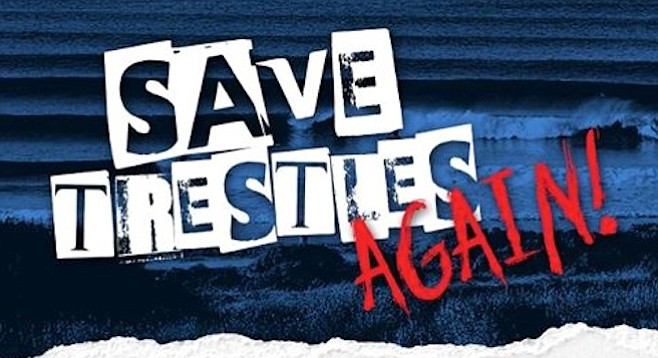 Take your road and use it

The San Diego Regional Water Quality Control Board voted unanimously Monday, March 16, to reject the Orange County Transportation Corridor Agency's second try at getting approval for what it calls “the Tesoro Extension” — and what many see as a segment of the proposed toll road through San Onofre State Beach.

About 200 people, including locals who surf San Onofre, attended the meeting at Liberty Station to speak against the project, which was handed back for reconsideration of the 2013 decision rejecting it. Several thousand people wrote letters against the project.

The fight began more than ten years ago, when the agencies designed a toll road to run from northeastern Orange County, through Rancho Margarita, and then to run into the I-5 at San Onofre. The toll road as a whole died in 2008, with a series of agency rulings against it.

But the Orange County agency revived pieces of it and returned in 2013 to push a segment through from the Ortega Highway to Cow Camp Road in Orange County. The regional water board rejected the plan, calling it “piecemealing” the road through.

The toll-road agency then appealed that decision to the State Water Resources Control Board and it was sent back for clarification.

This time, boardmembers Gary Strawn and Eric Anderson voted with all other members, saying their procedural concerns were addressed.

The board clearly stated its concern over the significant impacts to high-quality waters that would result from the proposed toll road along undetermined alignments.

It probably isn't the last time the toll road will come to the water board, executive director David Gibson said.

"This decision will certainly be petitioned to the state [water control] board and courts, but the [regional] board is confident it made the right decision for the right reasons," he said.

Stephanie Sekich-Quinn of the Surfrider Foundation called the decision a significant setback to the toll-road planners. Surfrider, the California State Parks Foundation, and surfers have been fighting the road for more than a decade, and Sekich-Quinn says they are ready to fight it for as long as it takes.

"This really is a case of constant pressure endlessly applied," she said. "For over a decade, thousands of people have spoken out against this road — proving that public participation works to influence decision-making."

Toll-road spokeswoman Sarah King said in a written statement that the agency "is disappointed that the regional board is refusing to abide by the state board's order. Denying the extension of a roadway that is desperately needed to alleviate traffic congestion does not solve the region's growing transportation problems….

“TCA is determined to find the right solution to solve mobility challenges facing South Orange County residents and commuters, and strengthen its partnerships with stakeholders in a way that addresses mobility challenges and minimizes environmental impacts.”

Forgive me if this seems cynical, but it does occur to me that perhaps there are developers who are itching to get their hands on this area, and having the road there would facilitate that process quite a bit.

I'd say that it has been clearly demonstrated that the public does not want the road. So who really wants it, and why?

Lets home Peevey does not get on the Water Board.