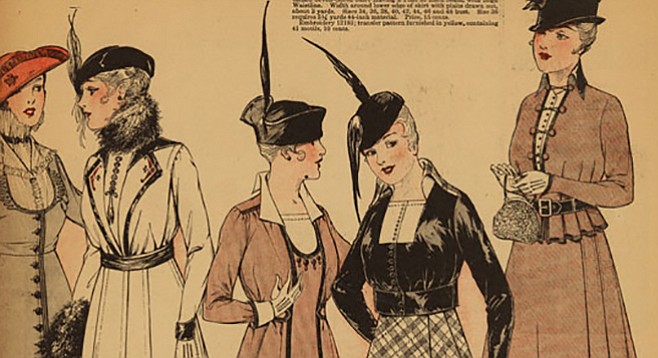 Not for all their wealth

Pay-to-play stage roles for rich women — but would the manager ever let one play a lead?

I found this in the San Diego Union, July 8, 1887, a reprint from the New York Mail and Daily Express.

The best dressed character in the show spoke only ten lines. “Her costume was a perfect fit, and of rich material, and she wore superb jewelry.”

Curious about such an expensive outlay, the reporter (unnamed) met backstage with the show’s manager asked the cost of the dress.

“She furnishes her own dresses and pays you a salary?”

“Exactly,” replied the manager. “She is a rich woman who is stage struck and therefore willing to pay me for the privilege of appearing on my stage.”

Neat notion, the reporter surmised. “The manager of a first class theater could always count on at least one source of income. But I suppose such women are few in number?”

“Look here.” The manager opened a book and flipped through several pages with names and addresses. “There are some fifty people so anxious to appear on the stage they are ready to reverse matters and pay me a salary during the time they appear at my theater.”

So he could people the stage with paying amateurs and “make a small fortune every night?”

“Yes, as long as people would come to see them act. But I’m afraid the audience would be so slim that these rich amateurs would no longer consider it a privilege to play at my theater.”

Would he ever let one play a leading role?

“Not for all their wealth. But the beauty of this little arrangement is that these people are not over ambitious. Give a woman of this class a character which requires rich dressing and she is satisfied, even if she has but a few lines to speak, or only stands among the super ladies. It is a very easy matter to suit them. These are what my amateur ladies delight in.

“A case in point. The last play had a seven line part that had to be richly dressed. The costume must have cost $2,000 or more, for it was from Worth, and she must have worn thousands of dollars’ worth of jewelry.

“She came to the theater every night in a private carriage, went on stage, got off her seven lines, and drove away.

“Now calculate the advantage to me of employing her. She paid me for coaching her in her part a couple of weeks before we put the play on. I was on a regular salary from her while the play ran; she saved me the expense of buying a costume, and after all, she did the part better than most of the professionals I could have got for $25 at week.”

“Why, they don’t give me so much trouble as professionals. They’re a pliable as putty.”

Will you cast two playing amateurs in the same show?

“I will a young fellow but no other girl. While these women are content to play a minor role, each wants the best minor role. One of them wouldn’t play a seven line part if the other had been cast for a ten liner.”

Does the amateur perform for the entire run of the show?

“Oh, no. Rarely longer than a couple of weeks. I leave her in the cast until I find – from the box office — that she has drawn all her friends to the play. Then off she goes and another takes her place.”