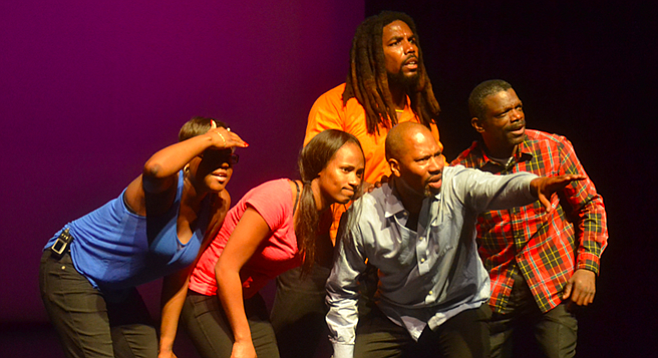 Artistic director Calvin Manson opens the Ira Aldridge Repertory Players 31st season with its 199th production, a choreo-poem, based on his poetry, that begins in innocence and concludes in tragedy — and hope.

Ntozsake Shange coined the term “choreo-poem” in 1975, to describe the form of For Colored Girls Who Have Considered Suicide/When the Rainbow is Enuf: a multidisciplinary expression combining poetry, dance, music, dialogue, and movement. In effect, performers use, and appeal, to all the senses.

As in For Colored Girls, Passion & Honey follows the lives of five African-Americans, taking a multi-expressive, harsh, and tender look at growing up in America from the late-'50s to today.

Five friends choose a subject — playing in the street, say, or a favorite toy train — and riff on it with childhood memories. Some, like jumping rope “double-dutch,“ are fond; others, like having no place to play, become early signs of exclusion and double standards. They lead to the question, raised by Michael Williams, “God Why Did You Make Me Black?” (“Why make me the one that everyone wants to hold back?”).

Emerging sexuality hits the quintet head on. Responses range from “Child Woman” and “Afraid to Touch,” to “Stepping into Manhood” (the 10 commandments of being an adult male) and one of the evening’s most powerful choreo-poems, “The Blues Drew Blood” (the devastated speaker, a pitch-perfect Leon Matthews, is “bleeding blue”).

The evening unfolds in three scenes. In each successive one, the questions expand.

In scene two, for example, when a young man says he doesn’t understand why women cry, an elderly man replies, “Son, you never will.”

Scene three enters the political realm. One question asks “How Could the Sky Burn?”

A series of choreo-poems recall April 4, 1968, the assassination of Dr. Martin Luther King in Memphis, and reactions to the unthinkable crime (though not including the belief, held by Coretta Scott King and many others, that James Earl Ray was a scapegoat*).

The evening’s highlight: Kalif Price performs “I have a dream too, Dr. King,” a vision that erases the horrors of African-American history with a counter-version of the past. Price, who should play Othello someday, fills the theater with a battle between outrage and peaceful means. In effect, Price re-writes history with Dr. King’s non-violent approach.

The performances on opening night ranged from stirring to amateurish. Too often the cast played to the floor, instead of the back row. Some tended to recite, rather than feel, the words, and needed to enunciate more clearly.

And though the piece is a “choreo-poem,” using movement and music, Calvin Manson’s words should be foremost. As he has shown in his Poetical: Not to be Played on the Radio and many other works, Manson is a deeply feeling, verbally rich poet. Man is he ever!