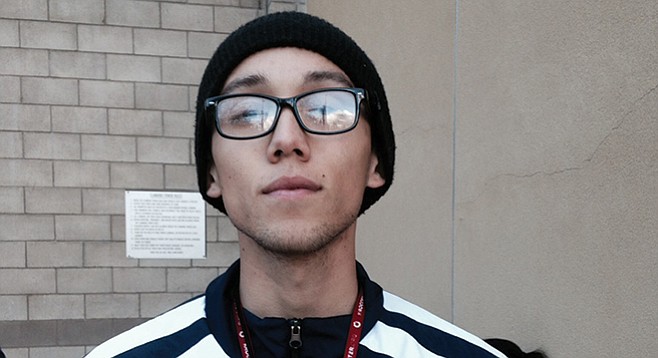 Bombingham, Memories of a Geisha, Born to Run

“Bombingham, by Anthony Grooms. It’s a story about the South. This kid grew up in a really racist town where some people got killed when a black church got bombed. The kid is black, and he knew some of the kids who died in the church — it was a small town. The church bombing isn’t the whole story, but it had an impact on his life. The whole book is told in flashback. He goes to serve his country and he becomes really good friends with people, and then his friends get killed in the war....”

“Just the way it was written. I like how he’s in wartime, doing duties in the trenches, and these flashbacks hit him and he gets really emotional and he’s writing and his military partners are, like, ‘Come on, get back on your feet!’ and stuff like that. It’s not much of a conversational book; he’s telling a story. And he’s really graphic about everything.”

Excerpt from Bombingham: “I looked where the RTO and the squad leader had been. They weren’t there. Our line was still. ‘Just be quiet,’ I said. ‘Just be real quiet for a while.’ For a moment it seemed like a beautiful summer day. Blue sky. White billows of cloud. The rustle of a light breeze. It could have been Alabama. Alabama was ‘the Beautiful State.’ That is what the word meant. Haywood knew this. He knew a lot of what I knew. He was from Eufaula. I was from Birmingham. Dear Mr. and Mrs. Jackson ... Dear Haywood’s Mother and Father ... Dear Haywood.... I closed his eyes, and now I had his blood on my hands. ‘Let’s be quiet for a while.’

“The thirty-calibers picked up again; the mud became soupy with blood and piss; the sun became hotter, and the air filled with biting flies. There was the smell of open bowels, smoke, and oil. The guns whined and popped incessantly. I lay beside Haywood and nestled my face in the mud beside his torso. The mud was warm and smelled faintly of manure.”

What book was most life-changing for you?

Memoirs of a Geisha

“My favorite book is probably Memoirs of a Geisha, by Arthur Golden. It’s this really interesting story of this little girl and how she gets treated. It just got me thinking about how the culture is so different. It’s something I didn’t know, and now I know. Like, in the U.S., we have more freedom to do whatever we want, you know? But over there, for her, it was more like being a slave. It was interesting the way she was treated practically like an animal or just a nobody, and she grows up to be a geisha — like, the most respected woman there.”

What sort of books do you like to read?

“I like books for the way they entertain me and keep me interested, and that open my eyes. I don’t like reading sci-fi or anything like that. I like true stories, interesting things that happen somewhere. I would rather read something that’s factually teaching about something or someone.”

Do you talk to your friends about what you read?

“Yeah. I go to High Tech High International, and every year, we have an English class. Every Monday, we have book-club meetings. We have about 18 people per class, so we just sit in a circle and share what the book is about so far, how much we like it. Mostly everyone reads a different book, so we’re just figuring them out instead of arguing about them. But last year, everyone did read the same book — Born to Run, by Christopher McDougall. It’s about this person who is looking for this tribe in Mexico; the people in the tribe run 130-mile marathons. He wanted to see if they were real and tell the story of how they got there. And he wants to find this specific runner called White Horse. He goes through everything, and eventually, he finds White Horse. They start entering him into races, and he starts winning. I like running a lot, so I liked that.”