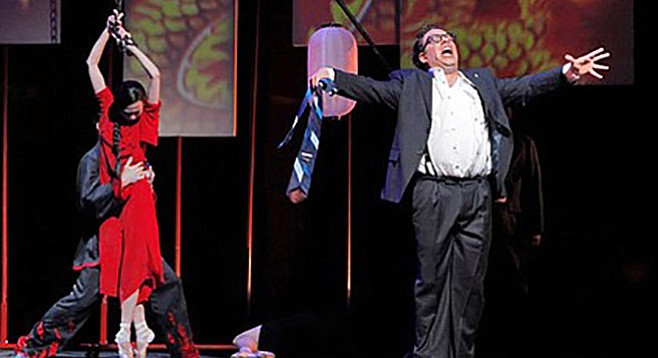 "Kissinger" keeps it to a low rumble

Nixon in China opens on Saturday March 14th at the Civic Theater. The showtime is 7 p.m. We continue with our interview of big-bad-Kissinger, Patrick Carfizzi. Part 1 of this interview is also available.

San Diego Reader: What was the relationship like between Nixon and Kissinger?

Patrick Carfizzi: Kissinger was useful to Nixon. Nixon was a very intelligent man; he knew very well to surround himself with other intelligent folk. Nixon was also brutal in terms of his personality and his temper. There’s lots of history of he and Henry at odds, severely. There was no love lost between these two men at all but they were useful to each other and both of them saw the benefit in that. However, I don’t think hate is too strong a word when you refer to the two of them.

SDR: Certainly not if you’re doing an opera about it. The higher the stakes, the better the drama. Always choose love or hate, right?

PC: Yeah, I mean, in terms of communication on stage, the extremes do help and then they give you a good structure and framework in which to express in the middle. Then you get a far wider spectrum to explore.

SDR: Perhaps part of the drama in the relationship came from Kissinger perceiving Nixon as failing him?

"I am the wife of Mao Tse-tung" by Kathleen Kim

PC: Mm-hmm. And, you know, Henry is not a dim man. He’s quite clever, quite intelligent.

SDR: You’d think this would be an interesting show for Southern California with John Adams being Californian and Nixon being from Yorba Linda.

PC: Yeah, it should be. I’ll be curious to see how audiences react. The show makes good sense--as abstract as the show can get in terms of its libretto and its musical ideas, it works — everything does work together. It’s a little more vignette-ish in terms of, you know, if you’re coming to look for a through-line, go study history.

PC: Yeah, it’s definitely more vignette. More moments of the trip as opposed to showing one day of the trip or something like that.

SDR: It’s very poetic. Since opera is almost always in a language different than English, we kind of think of it being more poetic than it is sometimes. Sometimes it’s very mundane.

PC: This is a bit more, again, abstract with a lot of poetic language. And she [librettist Alice Goodman] chose — I think both for purposes of inference and for purposes of art — she crafted a libretto. She really crafted a libretto, as opposed to simply sitting down and saying, “Well, OK, we’re going to tell this story. We’re going to — Nixon’s flight to China. Then so-and-so said this, and da da da da...” you know. Everything is spelled out, much like the music. Everything, everything, everything is spelled out. Every detail is managed down to the finest level. That’s what makes the piece work I think.

Sign up for classical music alerts to get notified when the next part is posted.