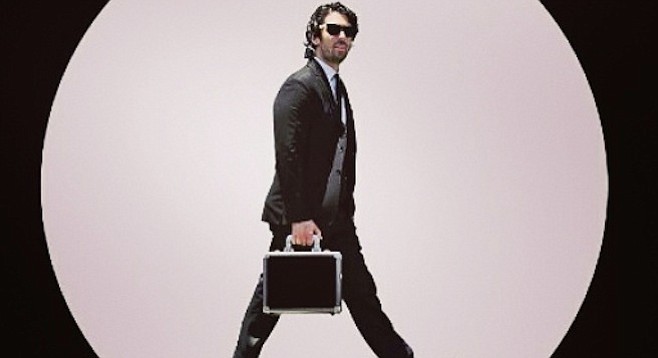 ”It's been an amazing four years, but all good things must come to a close...over and out...,” Agent Snickerdoodle posted on his Facebook page on February 25. He no longer responds to texts, emails, or phone calls to his delivery service.

The former UCSD PhD student (who goes only by the “Agent Snickerdoodle” moniker) dropped out of school and started his successful cookie business on-campus in fall 2011, according to UCSD's Guardian.

As his notoriety grew, Agent Snickerdoodle began delivering not only on the UCSD campus, but across San Diego. He showed up at customers’ doors dressed in a Secret Service–style black suit, skinny tie, and sunglasses carrying a briefcase filled with cookies, dubbing his business “The Secret Cookie Service.”

He started out selling basic chocolate chip (his mom’s recipe), and then his repertoire evolved to include cookies n cream, M&M, brownie-stuffed chocolate chip, and red velvet. Cookie monsters could receive deliveries Monday through Saturday between 8 p.m. and 1 a.m. A minimum order was eight cookies for $12. Agent Snickerdoodle eventually employed ten “agents,” according to the Guardian.

His story was also featured in SDSU’s Daily Aztec, the La Jolla Light, Huffington Post, and on channels NBC 7, CBS 8, and FOX 5.

Agent Snickerdoodle is moving to San Francisco with his wife, according to the Daily Aztec, but wants to keep his business alive. He urges interested potential agents to contact him at via email.

The Reader has learned that Agent Snickerdoodle and his wife have already moved to San Francisco, where he is working for a computer firm that has clients including Apple and Google. The former chemical engineering student said he misses the business, but it was time to go back to his first love — computers.

“I had no family life…I was just consumed by the business. I would see my wife one or two hours a day,” he said. “I personally couldn’t devote any more of my life to it.”

“If someone buys the business, I’ll give them all the cookie recipes. They deserve to have them.”