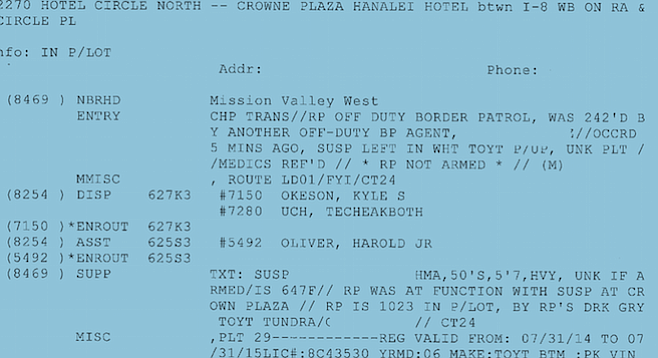 Liquored up Border Patrolmen have disagreement

A bloody one, after a union meeting, in the parking lot of the Hanalei

A Border Patrol union meeting on June 9 ended in a parking-lot brawl, a police report, and a series of requests for temporary restraining orders among current and former officials in the union.

On Tuesday (June 30), all five federal agents went to court in Chula Vista and agreed to dismiss the restraining order requests they’d filed against each other.

Border Patrol officials confirmed that those involved could face disciplinary measures and even firing, but it was pointed out that all the events occurred while the agents were off-duty.

The conflict erupted after the June 9 meeting held at the Hanalei Crowne Plaza in Mission Valley. Food and beverages, including alcohol, were served “in order to foster a sense of brotherhood and boost morale,” according to Thomas Ward’s account of the evening.

Former Local 1613 president James Harlan was the first to file for restraining orders against Thomas Ward and Robert Lopez, on June 12.

According to the affidavit with the filing, Harlan was at the meeting to appeal the newly elected leadership’s decision to fire him as a union representative. He lost the appeal.

After the meeting, Harlan, Everlyn Prado, and Samir Kourda — Harlan’s allies — adjourned to the hotel bar. Ward, newly elected 2nd vice president, and Robert Lopez, the 1st vice president of the local, were also in the bar.

According to the affidavits, the meeting beverage service wrapped up by 10 or 10:30 and they left the bar at 11. Once the men got to the parking lot, tempers flared. Each side declares under oath that the others were drunk and obnoxious.

“They were staring at us with angry, intimidating looks on their faces,” Harlan avers in his filing. “I did not respond to their looks, but I was troubled by their presence because both men have a long history of threatening me with violence.”

According to Lopez (who, along with Ward, filed for a counter–restraining order against Harlan, Prado, and Kourda), Prado allegedly left the bar without paying up. After Ward and Lopez settled up, they went out to the parking lot and the three followed them out, Harlan “shouting expletives” at them.

“I told Harlan something to the effect of me being done with Harlan’s grandstanding, his lies, him stealing from the union and making a mockery of the union,” says Lopez. Then, he says, Harlan charged him and he was forced to punch Harlan. “We continued to exchange blows until Harlan went to the ground.”

Ward, along with Harlan allies Prado and Kourda, decided not to fight. San Diego police showed up and took a report after Ward and Lopez had left, noting the reporting parties “had been drinking.”

No one was arrested or charged. Harlan and Ward reported injuries. Harlan sustained a bloody nose and bruises all over his head, neck, back, and arms. Ward took a punch to the head that left him with a contusion and he scraped his elbows and knees.

In response to Harlan’s restraining-order requests against Lopez and Ward, both sought restraining orders against Harlan, Kourda, and Prado — initiating a total of six court cases and a stack of affidavits.

All of which meant that the federal agents had to surrender their guns at Border Patrol stations. The files note the federal agents’ duty weapons among an impressive collection of guns, all of which will be returned now that the restraining orders have not been issued and the cases dismissed.

“The judge felt this wasn’t a civil matter — that it belonged in criminal court or being handled by their own agencies,” a courtroom insider said.