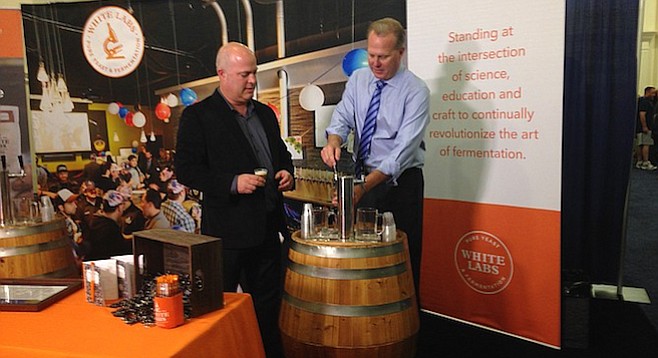 The mayor approves...maybe a czar would, too

Future of White Labs yeast includes the past

"We are beer innovators in San Diego," said the mayor. "It's important to celebrate one of the great things that has made this industry what it is, which of course is the contribution of White Labs."

CEO Chris White founded the company in 1995 with a PhD in biochemistry and a handful of yeast cultures he'd collected as a home brewer. White Labs' first clients were Pizza Port Brewing and brewing supplier Home Brew Mart. Within a year it was providing yeast to local upstarts including AleSmith, Stone, and Ballast Point. Today its 100-plus employees work with a collection of more than 300 unique yeast strains and a customer base exceeding a thousand commercial breweries worldwide.

"I was selling White Labs yeast at Home Brew Mart before it was even White Labs," says Nickel Beer Co. owner Tom Nickel, who worked at the supply shop before going on to become an award-winning brewer. He says, "White Labs was revolutionary because it was the only ready-to-go, ready-to-pitch liquid yeast," meaning the liquid culture contained enough live cells that it could be added to a brew immediately, rather than requiring up to 18 hours of home cultivation first.

"The drying process in itself can be pretty hard on yeast," Parker says. "If you dehydrate a fruit…it doesn't have the same quality a fresh fruit would have, and it's the same thing with yeast." Thanks to its pitchable liquid yeast, White Labs grew a huge reputation. 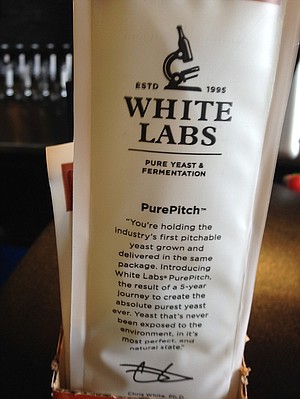 Twenty years later, growth and innovations continue, as the company just patented a FlexCell material that allows it to both propagate and seal yeast cultures within a single package, eliminating the need to transfer — and potentially damage — cultures. These so-called PurePitch packs resemble large ketchup packets, eliminating the need for glass containers and increasing shelf life for the live cultures by as much as 50%.

In the meantime, White Labs has plans to open a new production facility in North Carolina next year. It's already opened an R&D lab in Davis, a manufacturing facility in Copenhagen, and a distribution center in Hong Kong, which allows easier delivery to customers in Australia, New Zealand, and around the Far East. "The end goal," Parker says, "is to be able to get yeast into China."

As for the future, White says he's still building on his collection — and his knowledge.

"There are yeast strains out there from before the Russian revolution," he says, "really cool strains that are in historical yeast banks. And we're still in the process of trying to collect those and find new ones."

He's also given 96 yeast strains to local biotech firm Illumina, which is in the process of sequencing their DNA. White says this information will help brewers recognize, "What is the yeast that has the brewing properties you want, because it has certain genetics that produce the flavors. I think it's going to really help our understanding of beer fermentation."