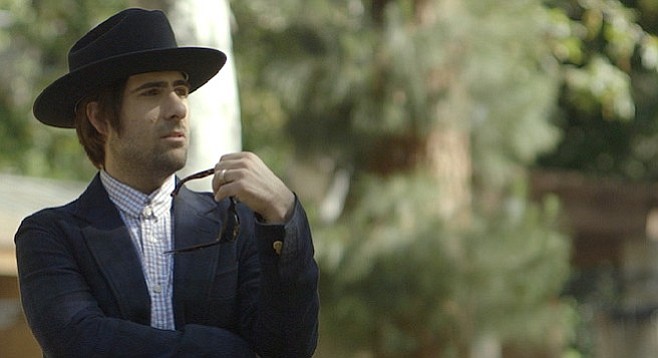 We caught up with Jason Schwartzman en route to a doctor’s visit. Our talk was frequently (and amusingly) interrupted by a confused driver unable to locate the office. Here’s our conversation, minus the directions.

Jason Schwartzman: You sound like you’re originally from Chicago.

Scott Marks: Wow. Everyone says New York. How did you detect a Chicago ring?

JS: I heard the accent and figured Chicago or Detroit or maybe upstate New York. Sometimes people from Rochester have a Midwest accent.

SM: I’m impressed, and I haven’t asked one question! Normally, I like to ask people if they remember the first movie they saw. But given your fabulous showbiz parents (producer Jack Schwartzman and actress Talia Shire), I’m going to modify it to, “Do you remember the first set you visited as a kid?” Possibly Never Say Never Again? 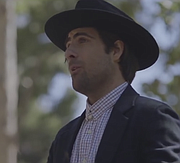 JS: I can tell you the first movie I saw, by the way, but my mom — though she acts and stuff — doesn’t like Hollywood as a thing. As a place she likes Southern California, but as a concept. She’s not really into Hollywood and agents and all that kind of junk. She doesn’t really live a life that comes in much contact with that, and consequently maybe I visited a set three or four times in my whole life. Apparently I was brought on the set of Never Say Never Again as a baby, but I don’t remember that.

SM: And since you brought it up, what was the first movie you remember seeing?

JS: The Last Unicorn. It’s an animated movie featuring the voice of Mia Farrow. Oddly enough, for a long time I would tell people about the movie and nobody knew what it was. Now I saw that it’s finally available on digital media if anyone wants to see it. It’s a great one!

SM: I asked friends on Facebook if they had any questions for you, and Phantom Planet kept cropping up. Would you consider reuniting Phantom Planet to score a movie?

JS: Sure. Yeah. Being in a band was an amazing time, but quite honestly, the touring is a hard way of life. A lot of people thrive out there, but I don’t think it’s necessarily in my personality to do that.

SM: Weren’t you set to play Keith Moon in a biopic of The Who?

JS: I was never set to do it. At one point, people were trying to get it off the ground, but that was a long time ago. It was crazy. I met one time with a producer about it. And — though he probably would never remember it — I spoke with Roger Daltry on the phone. I remember getting a call while at my mom’s house. There was a message that she wrote down that said, “Jason: Roger Daltry called.” She didn’t know who it was. I told her that he’s the lead singer with The Who. “I don’t know these things,” she said. “I don’t know your generation.” The Who is her generation, not mine!

SM: You had an Abbott & Costello routine in the making. 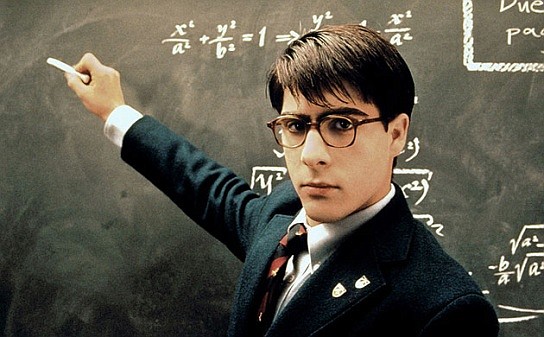 SM: You were 18 years old when you starred as 15-year-old Max Fischer in Rushmore. I love that your son in The Overnight is named Max.

JS: That was not on purpose.

SM: Damn! Don’t burst my bubble. At the time it was one of the most audacious and career-making screen debuts of its kind since Dustin Hoffman in The Graduate. This was the first time you had acted in front of a camera, right?

SM: What was it about you — your persona, your demeanor, the way you dressed, your physiognomy — that convinced Wes Anderson that you were the only person on the planet to do Max Fischer justice?

JS: It’s a good question that I don’t think I have an answer for. You should ask Wes. I can only answer from my perspective. I had never acted in anything and didn’t think I was going to get that part at all. I was really doing the audition for the experience. I was super nervous.

You go in there, and in my case, it was a bunch of kids who were all professionals. They were holding headshots and resumes. They had all done this a billion times before. And they all had their moms next to them, showing them around. They might have been going to four of these in a day. It’s almost like they’re athletes. So they’re very skilled at, and comfortable with, auditioning. I’m freaking out, nervous. In a way, I’d have been very happy not to have been there.

One by one, the kids walked out of the audition room, and they worked their way down to me. When I walked into the room, I immediately felt comfortable when I saw how young Wes was. He was only 27 at that time and just seeing him...he was wearing his Converse sandals, which I had never seen before. Come to think of it, I’ve never seen them since. (Laughing.) I remember thinking, Converse sandals. Young person. This isn’t so scary.

We started talking about the band Weezer and their second album, Pinkerton. That record was a big one for me at the time, and he really liked it, too. We talked about it for 20 minutes, and it just put me at ease. We got along so well that after the 20 minutes he asked if I wanted to read some scenes. I remember thinking, Maybe we should stop right now. Maybe I shouldn’t read. It was such a positive experience. Let’s just end it and we can be friends.

He made me read. After a few tries, he asked what I was doing the rest of the day. He asked me to go for a walk around the block while a few other kids read for him. I’m not sure if that’s what happened that made it so that Wes felt strongly that I should be in the movie, but that’s how it went down. 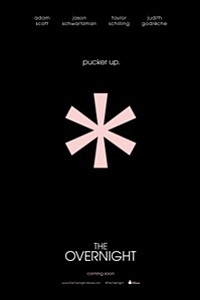 SM: Let’s talk about The Overnight. What was your initial reaction when you realized the enormous demands the script placed on you?

JS: Well, I knew that there was going to be a prosthetic involved. The script calls for me to be in my underwear so I’m thinking, We can do this. When you read a script and it talks about nudity, sometimes it’s in abstract terms. You don’t know if they’re going to show that or not. As I kept reading about my requirements (and about Adam Scott’s), it just sounded like a two-hander, so I knew for a fact there was going to be a prosthetic.

JS: I think it was always built into the way they were going to do it. And I could have, by the way.

JS (Laughing): The movie was shot in 12 days. When you have someone totally naked on a set, it changes the way you can make it. So much more protocol has to be involved in terms of not making other people uncomfortable. You can’t just be free to make it in the way we did. It would have involved a lot more red tape, I think.

SM: Wasn’t the point of the film to make things a little uncomfortable for the viewer?

JS: Absolutely. We didn’t feel uncomfortable at all while we were making it. In fact, there is something about how extreme it could be without going all the way that made it liberating. If we weren’t as nude as much as we are in the movie, I don’t think we’d have been as free to just act.

When we were about to show it at Sundance, I was so excited to see it with an audience, hoping that we’d get laughs. I didn’t think about the tension. I have never been a part of anything with tension like this. It’s a cool feeling to be able to put an audience through that. 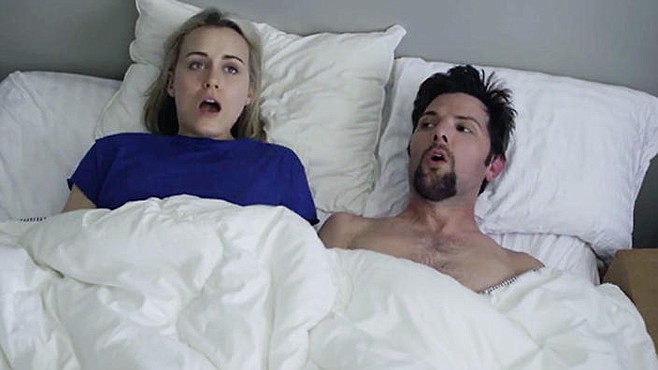 SM: Here’s a “What If?” question: What if the film started in the park instead of the bedroom? I’ll tell you why I ask. Alex and Emily have been married for a long time. One would think that, by now, they would have grown past the micro-phallus. It would have been more genuine (and uncomfortable for the audience) had this come up later, in the hot tub, as opposed to being foreshadowed in the opening.

JS: Here’s two things: I like the idea that even though you’re in a relationship where you talk about stuff and are very open. Clearly, if you watch them, it seems that sexually they have a routine. Just because you talk about something and because it’s out in the open, you sort of, on some level, feel that you’ve addressed it. This couple hasn’t addressed it. They’ve just found a way to live with it, instead of progressing through it. That was something I was very taken by.

And in the beginning of the movie, you don’t know that he has a small penis from the sex scene. You just sort of get that they’ve been together for a long time, and this is just what it takes.

SM: Doesn’t he say something about his penis not being big enough?

JS: In the first scene?

SM: Sure. When they’re having sex.

SM: Did you get to keep the costume?

JS: The director has it just in case there’s a sequel.